WHAT NEXT FOR HS2 AND FREIGHT?

It has been some time since we last discussed HS2 in this column. Over the intervening period, there has been substantial progress with the project, with the Phase 1 bill receiving royal assent, and the procurement process for construction of the route getting underway. Assuming there is no change of direction with a new Government, there is a real prospect of work commencing fairly shortly.

For freight, the parliamentary process did not change a great deal, but there were some welcome assurances, particularly around the use of rail freight for building the route at the London end. We also understand that several of the consortia bidding for the Phase 1 contracts have rail options in their proposals, which will hopefully lead to a significant use of freight services for spoil removal and supply of construction materials.

The focus now turns to the operation of the route, which starts in less than a decade according to the planned timescales. DfT is tendering for a new West Coast Partnership franchise to lead on the operational transition, for both the new route and also the existing West Coast main line (WCML). Acting as shadow operator for HS2, the Partnership will play a significant role in service and timetable design, as well as in areas such as rolling stock procurement. This is a pragmatic move, but brings with it a host of questions on how the franchise will take account of the needs of other users of the route.

And it is in these areas where the most concerns remain for freight operators and their customers. The West Coast main line is a vital route for freight, with 95% of intermodal services using it at some point, as well as significant flows of other commodities. It is the key corridor for domestic intermodal freight between Scotland and Daventry, and there are several proposals for new interchanges alongside the route. Serving Manchester, Birmingham, Liverpool and the Central Belt, there is little prospect of the demand for rail freight diminishing, and every prospect of growth. This has been recognised by successive Secretaries of State in making the case for HS2, and we remain optimistic that there could be additional freight capacity on the WCML south of Birmingham as services migrate to the new route.

North of Birmingham, however, the situation is rather different. Between Handsacre Junction and Crewe there are known capacity constraints once HS2 trains commence operation to Manchester and beyond, which will persist until Phase 2a is complete. This is planned to be only a few years behind Phase 1, but with the legal processes not yet underway and funding not secure, there is a real concern it may not proceed as quickly as proposed. This would be a significant headache for freight and other passenger services over that section, with growth severely limited, or worse.

Beyond Crewe the timetable is even more challenging with the addition of HS2 services onto an already-congested section of route. As is so often the case, it appears to be freight services that are expected to ‘move up’ to make room. Work undertaken for HS2 a few years ago demonstrated that capacity for freight would be reduced, not increased, from 2026. Class 4, 75mph freight trains, operated by Class 66 locomotives, would be limited in length to 410 metres and the requirement to be looped more frequently would increase journey times to between eight and 10 hours between Crewe and Carstairs. The work also assumed freight trailing loads of 1,000 tonnes, significantly lighter than today’s traffic and therefore unlikely to be economically sustainable.

DfT is now starting to look at options, which include a greater use of electric haulage. The freight operators are not averse to such a proposition, but such an investment is unlikely to have a business case if it does not provide any additional growth over today’s services. Further, operators are presently being discouraged from electric haulage on some parts of the route due to concerns over power supply capability – a factor which will only worsen with additional HS2 trains on the route. This can be fixed, but requires investment that does not appear to be included in Government plans for the next Control Period.

Over the coming months, we need to find a way forward on these issues that delivers an acceptable capacity solution for all users, including freight. This will be a key success for this project, and one that cannot be overlooked. 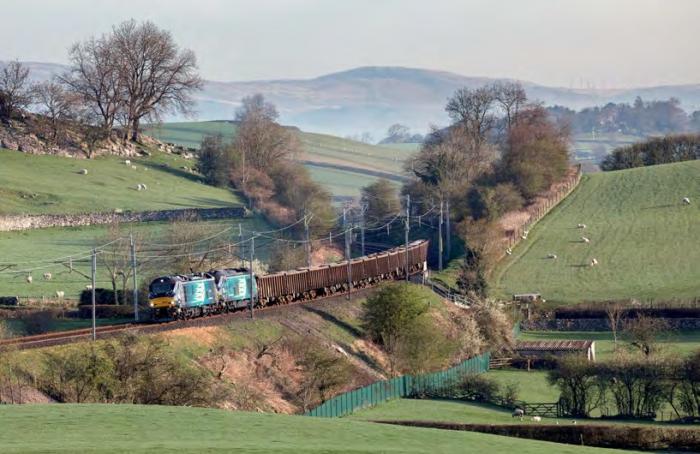 Modern electric freight haulage: Class 88 No 88002 on 3 April 2017 with its first loaded test run. The bi-mode loco is seen running in tandem with No 68025 at Hincaster (between Carnforth and Oxenholme) on a Carlisle to Crewe working up the West Coast main line.
Rob France