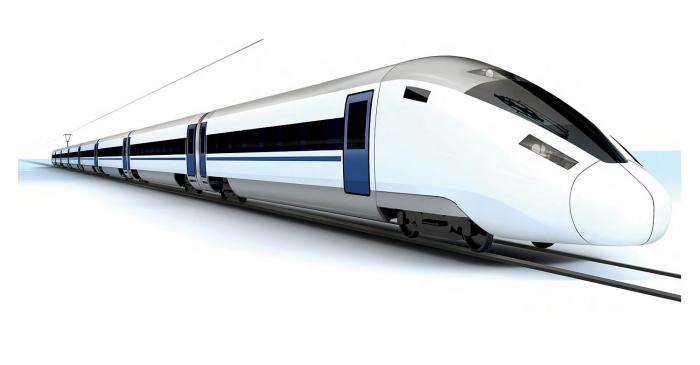 Design livery: bidders must use this default colour scheme during the tender process. Courtesy HS2

The release of the HS2 Train Technical Specification (TTS) on 27 July gives us a taste of what the first trains for the high-speed line will look like. The procurement covers around 54 conventional-compatible trains, capable of operating on both HS2 and the existing network.

HS2 Ltd told Modern Railways the decision to publish the detailed TTS at an early stage is intended to help Tier 2, 3 and 4 suppliers and open up the supply chain by providing visibility, following on from a programme of wider market engagement which has run for the last three years. Five bids are expected, from Alstom, a Bombardier-Hitachi joint venture, CAF, Siemens and Talgo, with bids due back by spring 2019 and contract award planned for early 2020. However, on 12 August The Sunday Times reported Talgo had launched legal proceedings against HS2 concerning the late addition of CAF to the shortlist of bidders.

Many of the details of the fleet were already known – each unit shall be 200 metres in length, with pairs of units operating some services. Linespeeds on HS2 itself will be at least 360km/h, while on the conventional network current maximum speeds are 125mph on the East Coast main line and 110mph on the West Coast (assuming tilt is not employed). Bidders are called to provide capability for 140mph operation on the conventional network if required later.

Strict performance criteria dictate trains must be able to achieve a journey time of less than 45½ minutes from London Euston to Birmingham Curzon Street, including two-minute stops at Old Oak Common and Birmingham Interchange; the timetabled journey will be 49 minutes, with the difference providing an operational margin. Similarly, a journey time of 3hr 45½min from Euston to Glasgow Central is required, including stops at Old Oak Common and Preston. From stationary, trains must reach the 360km/h HS2 linespeed in no more than 535 seconds on straight, level track, simultaneously covering a distance of 40km.

Reliability requirements are also demanding – HS2’s target is for a moving annual average delay per HS2 service on the HS2 network of no greater than 30 seconds. To meet this, the target mean distance between Service Affecting Failures is 300,000km on the high-speed line and 160,000km on the conventional network. Trains must also have no single point of failure of their traction, power supply, braking or train control systems that cause a train to be immobilised. Trains must be able to perform an automated check confirming they are fit for service, capable of being initiated automatically on-board or at the wayside. At least one vehicle of each unit must be fitted with accelerometers for detection of poor track geometry (and therefore ride comfort) and track quality issues.

On the high-speed line operation will normally be under European Train Control System (ETCS) with Automatic Train Operation (ATO), while on the conventional network the standard AWS/TPWS systems will be used with trains manually driven by what HS2 calls a ‘Train Captain’. A Connected Driver Advisory System (C-DAS) will provide driving advice if the necessary traffic management systems are available, while speed control and speed limiter functions are mandated.

A key aspect of HS2 operations will be for pairs of units to couple and uncouple at various locations, with trains dividing into portions for different destinations. The TTS calls for passenger-facing functions, including exterior door control, to be unaffected by this, with normal station operations able to continue. While doors could be closed during coupling and uncoupling, the design must not require this, and passengers must be able to board and alight while the manoeuvre takes place. Coupling and uncoupling processes must take less than 120 seconds.

Trains are required to have a moveable step at every exteriorThe colour scheme of the trains is not specified and will be selected and agreed during the design phase in collaboration with the West Coast Partnership franchisee.

The TTS presents a default colour scheme to be used by bidders during the tender process, and HS2 cautions that it shouldn’t be read as an indication of the final livery. The colour scheme in the TTS incorporates ‘HS2 blue’, both on the exterior of the trains and for the seat moquette.

A key specification of HS2 has been for a flexible interior layout, with potential for reconfiguration during the design phase or later in the unit’s life. One of the key roles of the West Coast Partnership franchisee will be to work with HS2 on the interior design of the trains.

The TTS defines three layouts bidders must present. A One-Space Layout (1SL) provides a single class of travel, with 2+2 seating throughout; here the service offer would be varied by features other than the seating arrangement.

A Two-Space Layout (2SL) will also incorporate premium seating in a 2+1 formation, with this accounting for between 15% and 20% of the total capacity. Prior to contract award, either of these layouts will be chosen as the base layout. In order to ensure the trains have capability to accept a range of layouts, bidders must also work up a High Density Layout (HDL), representing the maximum payload capacity of a unit.

The 1SL layout is specified with a seat pitch of 895mm for airline seats and 2,030mm for bay seats, with a minimum of two bays per vehicle and 32 per train. All seat positions are required to be no more than 12 metres from an exterior door, in order to minimise dwell times. The ‘pitch’ of windows is specified to be 1,790mm to align with seat pitch, measured between any feature that is common to each window. Bidders will be incentivised to minimise the size of deadlights (the surface area between windows), with HS2 preferring it not to exceed 300mm.

Toilets must be suitable for replacement with seats if the layout is reconfigured, and must include air-freshening devices, two hooks for coats and bags, a shelf or horizontal surface for small items, a bin, a visual display and a speaker for audio messages. All toilet doors must be locked using a mechanical device inside the toilet.

Wheelchair spaces must be integrated into the saloon, with a plug socket and fold-away table provided, with provision to modify trains in the depot to increase the number of wheelchair spaces per train to eight. Gangways must permit a passenger in a wheelchair to move between vehicles when the train is on straight track.

Each vehicle must have sufficient luggage space for half of passengers to bring a small bag and for a quarter of passengers to bring a large bag. Small bags must be accommodated within three metres of a passenger’s seat, while large bags must be accommodated between a passenger’s seat and the nearest doorway. Overhead luggage racks must accommodate a small bag, with luggage stacks for larger bags and a bulk luggage storage area to accommodate two bicycles or up to 2m3 of luggage, albeit these may be converted to seating.

The floor covering in saloons must be a hard-wearing carpet-like material.

Seats should be ‘comfortable for the user population’ and must be able to recline to at least two different positions while not affecting the space available to the passenger behind. The standard seat design, dubbed HS2 seats, must be at least 450mm wide and made of a moquette-type fabric. Premium seats must be wider at 500mm, with a leather-type fabric to be used.

Each seat must be provided with access to a plug and USB socket, visible to seated passengers and positioned so as not to require passengers to reach across each other to use them. Coat hooks, reading lights and cup holders are also required at all seating positions, along with storage for small items such as mobile phones. Airline seats must allow bags to be stored under the seat in front without encroaching on the space of the passenger sat there. Bay seats must have fixed tables able to accommodate a laptop for each passenger in the bay, while seat-back tables at airline seats must likewise be able to accommodate a laptop. All windows must have blinds covering at least 80% of the window when deployed. Wi-Fi will be provided throughout.

A seat reservation system will enable booking and re-booking of seats throughout a journey and must be capable of updating within 10 seconds of a change being made at wayside. All seats must have a system capable of detecting their occupation.

Catering facilities are also specified, although these are again subject to potential reconfiguration. The 1SL layout must include two trolley storage points, providing facilities to store and restock a trolley, one in each half of a unit. The 2SL layout does not have this requirement but must instead incorporate a café-shop in standard accommodation and a kiosk in one of the vehicles with premium seats. The café-shop will include facilities for the sale of hot and cold drinks and snacks, with a bean-to-cup coffee machine and a convection microwave oven. The kiosk will provide self-service facilities for selling hot and cold drinks and snacks, including chilled water to be dispensed free of charge.

The HDL provides a benchmark layout for future reconfiguration. Seats will be of a different type to those in the 1SL and 2SL layouts and are defined in the TTS as ‘a typical inter-city seat that has been used on another inter-city vehicle’; the ergonomics of the seat do not need to be considered, only its mass. HDL seats are still be in 2+2 configuration, and apart from a single bay near the centre of each vehicle would all be in airline configuration.

In the HDL layout luggage stacks can be removed and/or reduced in size so there are only two in each vehicle. The TTS does not specify how many seats should be provided in the HDL, but HS2’s ultimate preference is for at least 700 seats in a unit, and for a total capacity (seated and standing) of 950 passengers.

There is also a detailed specification for the layout of the driver’s cab. A combined traction/brake controller must be located to the left of the driving seat, with a ‘driver’s safety device’ foot pedal under the desk controlling the driver vigilance function. The cab desk must include space to hold a tablet read from the driving position, with a USB socket to provide power for this.

Coat hooks, space for storing bags, a storage cupboard, power and USB sockets will also be provided. Cabs must include side windows allowing the Train Captain to have a view of the platform and signage.