WHAT WON’T HAPPEN IN DECEMBER?

The eight operators affected by the announcement all planned on introducing timetable changes of some significance in December.

Govia Thameslink Railway was due to introduce the next phase of additional Thameslink services, bringing peak frequency through the core section between St Pancras and Blackfriars to 20 trains per hour. However, in practice this consisted of simply doubling the frequency of two existing cross-London services (Cambridge to Brighton and Bedford to Littlehampton) from hourly to half-hourly.

TransPennine Express was due to start operating its three return services per day between Liverpool and Glasgow, facilitated by additional capacity at Liverpool Lime Street following the rebuilding work at the station this summer. With the route for these trains not affected by overrunning projects, it is understood a decision on whether this service can be introduced will be made this summer. Northern’s enhancements, in conjunction with TPE, were due to deliver changes postponed when it was forced to rewrite its May timetable, although there was still concern about whether electrification between Manchester and Preston via Bolton would be completed in time (see ‘Infrastructure News’). 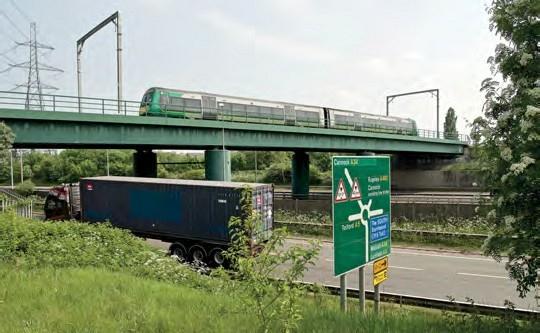 Waiting for wires: a Class 170 crosses over the M6 toll road as it passes under new portals on the Chase line near Cannock on 21 May 2018.
John Whitehouse

West Midlands Trains was to introduce significant changes including a number of new cross-Birmingham links and the diversion of its Trent Valley service from Crewe to London onto the direct route between Crewe and Stafford. It is understood one key factor for WMT is a delay in electrification of the Chase line, originally due for completion by December 2017, including platform lengthening in several places to allow longer electric trains to serve the route.

Great Western Railway’s enhanced timetable, originally planned for introduction in January 2019, was due to see a change ‘from an HST timetable to an IET one’, as the operator describes, taking advantage of its new Inter-city Express Trains (see feature, p72). While the delivery of the new trains will continue, the full benefits of improved frequencies and reduced journey times cannot be delivered. However, GWR explains that changes being made to the track layouts and depot access on its routes in December will mean the current timetable cannot simply be extended, and some work to re-write timetables will be needed.

London Overground had hoped to introduce additional North London line services following a cascade of units facilitated by introduction of its new Class 710 EMUs (see pages 20-21). South Western Railway was planning changes across its network, with a mix of frequency increases and journey time reductions, although it descoped its original plans following a public consultation (p9, May issue). CrossCountry had planned to introduce additional services between Bristol and Exeter, again a descoped version of the enhancements it had originally planned at an earlier stage of its direct award franchise.