RADICAL RESHAPING OF THE INFRASTRUCTURE ACROSS THE PENNINES COULD WIN FREIGHT TRAFFIC FOR RAIL, AN ACADEMIC REPORT SUGGESTS 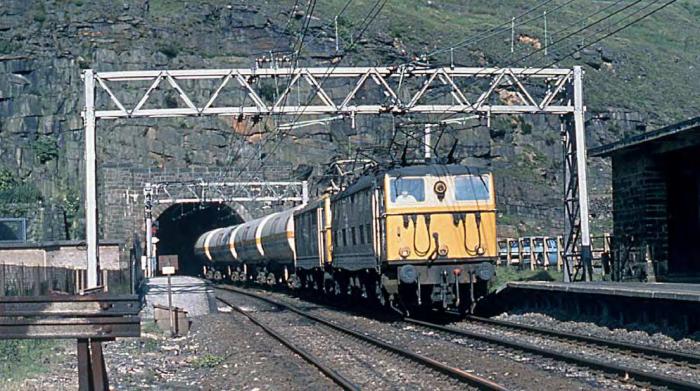 The way it was: a 1,500V DC overhead Class 76 loco emerges from Woodhead tunnel on 1 August 1977. One of the two Victorian single-bore tunnels can be seen on the left of the picture.
COURTESY COLOUR-RAIL

The Liverpool – Humber Optimisation of Freight Transport (LHOFT) study, recently completed by the University of Hull with the support of Innovate UK and industry partners, has an optimistic message for the railways. The study suggests that, with some gauge clearance work on existing lines, there could be worthwhile transfer of freight traffic to rail.A route with a generous structure gauge, permitting piggyback trains, would give the opportunity for large-scale modal transfer.

Starting point for the study was a challenge from North of England businesses: ‘How can we reduce reliance on long overland road haulage trips to south coast ports, use our local northern ports more, and why can’t this traffic be carried by rail?’

A key element of the study was to analyse cargo flows from the Continent to the North West of England, where the main flows arrive in either containers or unaccompanied road trailers.The LHOFT study estimates that the import market splits roughly one-third / two-thirds in favour of trailers.