TRANSPORT FOR London has completed further testing of the new Thales communications-based train control (CBTC) signalling being introduced on London Underground’s sub-surface lines. Testing on 2 and 3 December took place between Hammersmith and Edgware Road, which will be the first section to go live with the new signalling system in 2018. The Thales system will allow more frequent services to be introduced on the Circle, District, Hammersmith & City and Metropolitan Lines, and its introduction forms part of the Four Lines Modernisation (4LM) programme.

The testing weekend is the second on the Hammersmith branch, with TfL planning a progressive rollout across the four lines once the first area goes live. A concurrent programme is seeing the Bombardier-built ‘S’ stock trains progressively fitted with equipment for the Thales system. This programme is running behind schedule, with LU seeking to increase the train fitment rate to ensure 53 ‘S7’ trains are fitted ready for the go-live on the Hammersmith branch. Elsewhere within 4LM, TfL reported in early December that 61 of 76 planned platform modifications had been completed, along with 21 of 29 revised track layouts. The project to upgrade Upminster depot was close to completing design packages, while LU had completed site setup works at Ealing Common depot. Overall, TfL reports 4LM is currently forecast to deliver all timetable improvements between six months and one year ahead of the dates committed to by the project authority; the first major enhancement is scheduled for December 2021. 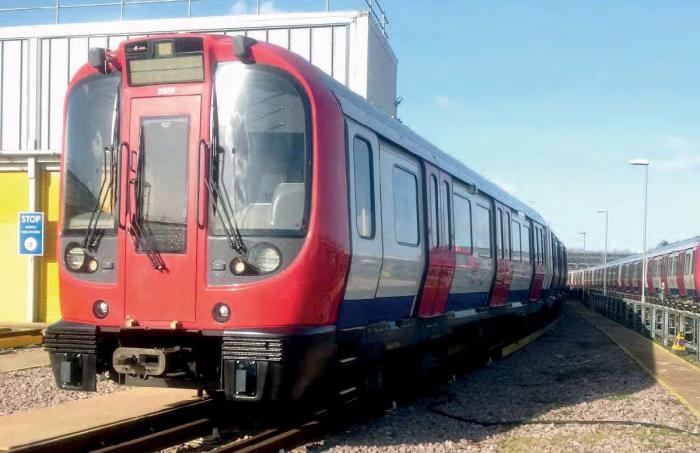 Thales-fitted S stock train: the signalling antennae are the grey blisters that sit between the tops of the two front windshields and the roof line. The ‘coat hanger’ antenna is the radio communications aerial (these two were confused in a picture caption on p17 last month). Courtesy TfL