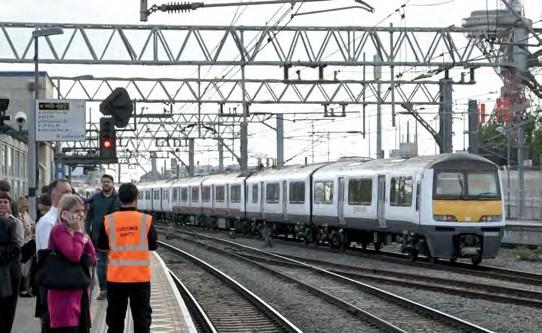 Hydrogen future? ‘Renatus’ unit No 321303 brings up the rear of the 17.33 Orient Way Sidings – Liverpool Street empty stock working at Stratford on 10 May 2018. Antony Guppy

ALSTOM IS working with Eversholt Rail on the conversion of a Class 321 electric multiple-unit to the hybrid hydrogen fuel cell/lithium-ion battery traction power system pioneered on the company’s Coradia iLint train.

The Government has set a clear objective of removing diesel rolling stock by 2040 and this requires a bold and innovative response from the industry. I am very proud that, working with Eversholt Rail, we are able to take the lead in that respect’. Alstom sees the potential long-term application of hydrogen in the UK as ‘very significant’.

Noting that less than 50% of the UK rail network is electrified, Mr Crossfield added that much of the UK network that isn’t electrified ‘is unlikely ever to be so’. Alstom believes hydrogen could offer the right zero-carbon solution for many parts of the network. Transport Minister Jo Johnson’s target for the elimination of diesel traction complements a similar government commitment for road vehicles.

It is likely the first conversion will be used as a demonstrator.

The Department for Transport has said it expects Northern to have alternative fuel trains operational on the Windermere branch ‘by 2021’.

For the Class 321 conversion Alstom will be drawing on the technology of its prototype iLint multiple-unit, which has resulted in orders from local authorities in Germany (p87, January issue).

A four-car Class 321 has a maximum speed of 100mph and a nominal power rating of 996kW with four axles motored on one vehicle. The challenge with the hydrogen conversion is likely to be finding space for the fuel cells and batteries plus the high-pressure gas storage cylinder within the restrictions of the UK loading gauge.

Performance is likely to be aimed at secondary routes with linespeeds up to 80mph. In addition to Northern, the hydrogen ‘321’ is likely to appeal to operators looking to replace Class 150 DMUs. Roger Ford