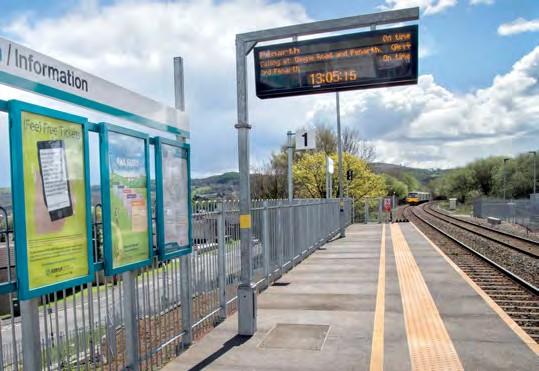 That’s the ticket: departure board at Energlyn.
Rhodri Clark

A TRAIN operating company whose fleet is dominated by Pacers and Sprinters may seem an unlikely candidate for the title of most punctual operator, but the right-time performance (RTP) statistics for Period 2 of 2017-18 put Arriva Trains Wales at the top of the league table.

This follows completion in January of Cardiff Area Signalling Renewal (CASR), which included an additional track and platform at Cardiff Central, bidirectional signalling for all platforms at Central and deployment of Automatic Route Setting. The Valley Lines in the Cardiff city region account for a large proportion of ATW’s services. ATW reports improved fleet reliability from new maintenance initiatives, and that a joint performance strategy with Network Rail is exceeding the targets that were set.

Commissioning in April of the second track between Rossett, north of Wrexham, and Saltney Junction, near Chester, has improved reliability for some of ATW’s long-distance services, but this would have a muted effect on ATW’s overall RTP because Valley Lines services are far more numerous.

The RTP statistics aim to record the proportion of services that arrive at terminating stations early or within 59 seconds of schedule. ATW’s RTP figure for Period 2 (30 April to 27 May) was 85.4%, the highest of all train operating companies. This compared with 82.1% a year earlier, and a moving annual average of 81.5%. Period 2 RTP statistics for other regional operators include 71.1% at Northern, 58.6% at ScotRail, 54.2% at TransPennine Express and 70.8% at Merseyrail.

The Public Performance Measure (PPM) statistics for Period 2, measuring arrival within five minutes of booked time, put ATW in sixth place with 93.7%, a slight decrease from the 93.8% that ATW achieved a year earlier. In the final quarter of 2016-17, the PPM for the Valley Lines service group was 96.4%, which is on a par with the usual PPM of comparable urban operations such as Merseyrail, c2c and London Overground.

Separate statistics indicate a large increase in commuting by train into Cardiff in 2016. The city council’s latest data on transport modal split show rail’s share of travel to work increased from 6% in 2015 to 8% in 2016. This was despite some disruption to services, particularly along the main line, as Network Rail prepared infrastructure for CASR commissioning or electrification. The Valley Lines fleet has not been enlarged for many years, but in the May timetable change ATW exploited the results of CASR by re-diagramming units to provide additional capacity on key flows in the peaks. Rhodri Clark