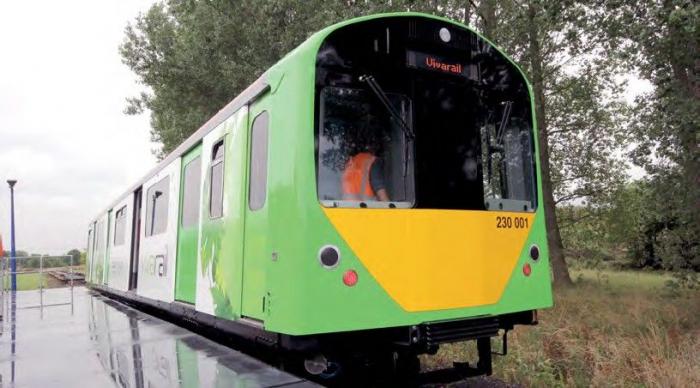 VIVARAIL HAS entered into an agreement with West Midlands Trains to build three new Class 230 D-trains for the Marston Vale line between Bedford and Bletchley.

The trains will begin operation in December 2018 and will be the first new trains to be introduced on the franchise. Two of the 3x2-car units will be required to operate the daily service on the branch. The ‘230s’ are converted from former London Underground ‘D’ stock trains and are designed to accept power modules which can be diesel, battery or, in future, hydrogen fuel cells. Vivarail says its first production battery vehicle is planned to be approved for passenger service this summer, although the Marston Vale units will be diesel-powered.

West Midlands Trains customer service director Andrew Conroy said ‘These trains are ideal for Bedford to Bletchley route. I am sure our passengers will welcome the new look and feel of the carriages and the extra space. When the new trains come on stream in December we will also be adding extra early morning and late-night services on the Marston Vale line on Monday to Saturday.’

A trial using the diesel variant of the Class 230 had been planned for the Coventry to Nuneaton route under the previous London Midland franchise but was cancelled following a fire on a train that was undergoing testing in December 2016.

Vivarail’s battery variant is unit No 230002, which it says is the first production battery unit in the UK, powered by two lithium ion batteries per carriage. The train has a total of four battery rafts, each with a capacity of 106kWh, and requires an eight-minute charge at each end of the journey to yield a 40-mile range. Vivarail says with a 10-minute charge this is extended to 50 miles, with these distances set to increase as battery technology develops.

The train is charged automatically through a patented automatic charging point, which Vivarail says is a simple and elegant design allowing battery trains to replace diesel with a minimum of time and effort. The train simply stops at a stop board and connects to the power source without the need for human intervention. Once the charge time is complete or the system detects the driver selecting power it shuts down before the train pulls away. The charging point needs an electrical supply of 11kV or 33kV and can either draw power from existing overhead or third rail supplies or from a static battery bank developed by Vivarail, in a design similar to that used for motorway service area electric car charging. The battery bank charges overnight at a low rate, reducing running costs by needing less electricity in the daytime, when tariffs are higher.

Vivarail says it expects the batteries it uses to have a seven-year lifespan, backed up by full warranty. The battery raft slots under the train using the same space envelope as the diesel genset Vivarail developed for its prototype Class 230 DMU. The company believes fuel cells could in future replace or supplement the batteries and foresees its trains will be running with hydrogen power ‘in the next few years’.

Meanwhile, Henry Posner, Chairman of Pittsburgh-based Railroad Development Corporation (RDC), which is a major investor in Vivarail, has revealed plans to take ‘one, possibly two’ of the Vivarail diesel-powered trains to the USA, where they will be marketed as a low-cost ‘pop up’ regional or commuter rail solution. Mr Posner says the trains will be completed by Vivarail in the UK before being exported.

RDC has begun sales activities in multiple cities on both the east and west coast of the USA and reports substantial interest in the concept, although it has no firm orders yet. It plans to offer the demonstration train(s) to cities to trial operation on rail corridors using the established US practice of ‘temporal separation’, ie running passenger trains in daytime and freight at night to overcome the otherwise onerous Federal requirements for collision worthiness imposed on passenger rolling stock.

Henry Posner says RDC believes there is an opportunity to change the approach of US cities to rail projects, especially those which have previously discounted the option on cost/complexity grounds, by demonstrating that they do not all have to be highly expensive and therefore require substantial capital funding, especially at the early development stage. Mr Posner says RDC is putting forward the proposition that with the Vivarail train cities can use the train to test possible services with passengers on board ‘for less than the cost of a consultant’s study into a possible service’. Philip Sherratt/Keith Fender