Proposal could save costs on wiring work 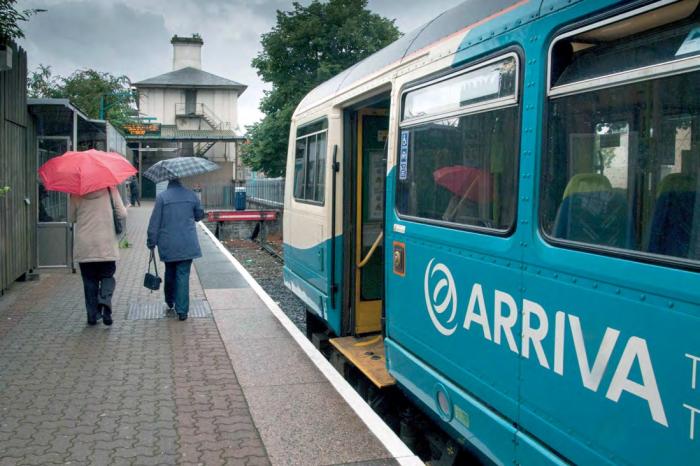 End of the line: for now. This is Cardiff Bay, where conversion to light rail could see the line extended into the former docklands.
Rhodri Clark

DISCONTINUOUS electrification may emerge as the chosen technology for modernising the Valley Lines when the new Wales and Borders franchise operator is announced.

The Welsh Government and its wholly-owned Transport for Wales body have declined to publish any details of the specification, or to share them with Assembly Members, until after contract award, which is due in May. The new Operator and Development Partner (ODP) is due to take over from Arriva Trains Wales in October. Following the withdrawal of Abellio and Arriva, only two bidders are left in the race:

■MTR with BAM Nuttall and Arup.

The Government decided several years ago that Network Rail would not be able to electrify the Valley Lines within the available budget of £734 million and within the required timescale. It sought an agreement to transfer the core Valley Lines – routes north of Cardiff Central and the Cardiff Bay branch – to Welsh Government ownership.

TfW ran a competitive dialogue exercise in which the bidders for the 15-year ODP contract presented options for modernising the core Valley Lines. Sources say all mainstream technologies, including heavy rail electrification, were put forward during the exercise but that light rail operation with discontinuous electrification is the front runner. Caerphilly Tunnel, more than a mile in length, is probably the largest structure where expensive engineering works would be avoided, with light rail vehicles using stored energy to run through the tunnel.

TfW is also procuring an Infrastructure Development Partner (IDP) to implement the physical works. The IDP will receive most of the core Valley Lines modernisation funding, but the ODP is in line to receive about £134 million for its involvement in the programme.

According to sources, TfW wishes to retain £300 million of the budget as a contingency, which ideally will be used for track extensions.

Priority is likely to be given to extending the Cardiff Bay branch beyond its historic terminus to the area behind the Wales Millennium Centre and Senedd, in the former docklands. This would exploit the street running capability that is expected to feature in the specification for the new Valley Lines fleet.

Another strong contender is a spur from the Cardiff Bay branch to permit direct rail services between the Bay and Cardiff Central. Currently passengers arriving at Central on main line services catch Valley Lines services to access the Cardiff Bay shuttle at Queen Street station.

Conversion to light rail would sever the long-established through running from the Valleys to Barry Island and Penarth, with through passengers changing to heavy rail services at Cardiff Central.

The station and adjacent land, to the north and south, are the subject of a £180 million transport interchange project involving City Deal and other funding.

The Welsh Government appears to have solved an impasse over a new bus station at Cardiff Central by offering to underwrite office development above the site and taking the leasehold on the bus station, which TfW would operate.

It also plans to buy the Saunders Road car park, between the railway station and the bus station site, from Network Rail. It would give the freehold to Cardiff Council and retain the leasehold. Cardiff Council says this would ‘enable seamless integration with the modernised train station development’.

The Welsh Government intends TfW will evolve to resemble Transport for London. It intends to transfer various rail functions – including ticket retailing, marketing and management of station car parks – to TfW from the ODP over the span of the 15-year contract.

The ODP will manage those functions initially because TfW will not have the resources and expertise to do so by October.

The Welsh Government’s longer-term goal is for TfW to operate Welsh rail services. The UK Government rejected its requests for an amendment to the Railways Act 1993 which would have enabled this to happen from 2018. Rhodri Clark