EAST COAST PARTNERSHIP WILL NOT BE A CONVENTIONAL FRANCHISE

Chris Grayling has told the House of Commons Transport Committee his proposed East Coast Partnership ‘will not be a franchise agreement in the way franchises were in the past’. Mr Grayling was addressing the committee as part of its inquiry into the East Coast franchise.

The Stagecoach/Virgin consortium operating Virgin Trains East Coast finished its tenure on 23 June, after which the Department for Transport’s Operator of Last Resort (OLR) took over under the name London North Eastern Railway (LNER). Mr Grayling said LNER would be a long-term brand for the route, and the OLR operation would help provide a transition to the East Coast Partnership, which the Transport Secretary had first announced last November as part of the Government’s vision for rail. At that point the aim was for the partnership to start in 2020.

Mr Grayling told the committee he believed with the East Coast franchise having failed twice before that ‘there was no way we could simply take it back and re-let it again in the conventional way’. He continued: ‘I do not think we can go back to the conventional paradigm on this railway. It has been tried three times and it has failed three times. I am not going to be the Secretary of State who says, “Well, let’s just re-let the franchise again.” I am trying to do something different.’ He said he had tasked DfT to look at what possible future models might look like, with his desire to unite track and train in mind.

The Secretary of State described the migration to the East Coast Partnership as ‘a process of evolution, not revolution on a single date in 2020’, saying ‘We are not now working towards a set date in the summer or autumn of 2020 to do everything. There is stuff we will do sooner, and stuff we can do later if we need to.’ He said the decision to appoint the OLR rather than agree a management contract with Stagecoach/Virgin helped this process, telling the committee: ‘We can start to mesh the two teams together now.

We can create joint ways of working. We can begin to plan the railway together, so we can evolve the LNER into the East Coast Partnership rather than simply waiting for a handover date in 2020, which would otherwise have been the approach.’

Asked whether a competitive process would be held, Mr Grayling told the committee ‘I do not expect simply to advertise for a train operating company in quite the same way. There are a number of different models we could adopt. We are working through different options now, and I will very happily come back to you to talk about that, as we make progress.’ He noted ‘I have said openly before that I rather like the public-private partnership model that exists around Manchester Airport’. He also envisaged having an integrated leadership structure with ‘a chief executive who has responsibility ultimately for making sure that both budgets (operations and infrastructure) operate, rather than just one and then the other’.

Mr Grayling said the first priority for new Network Rail Chief Executive Andrew Haines would be to ‘drive the devolution agenda in Network Rail’, saying the process is ‘about to get rocket boosters’ with Mr Haines’ arrival, and that this ‘makes the next step towards the East Coast Partnership operationally workable’. He also highlighted his desire for employee participation in the railway and for digital rail investment, saying ‘Bringing in the private sector to help establish a digital signalling system, and operating it as part of the partnership, is a very real alternative.’

Responding to criticism that the East Coast is not the best place to trial a partnership of the kind envisaged, Mr Grayling admitted ‘The honest truth is that if you were starting off a strategy of joining up track and train on a blank sheet of paper, this is not the place you would start’. However, he suggested the problems ‘are much less clear-cut than people suggest’, noting 45% of the route miles travelled are by LNER trains, and that if Great Northern services currently within the Govia Thameslink Railway franchise were moved into the LNER operation when the GTR deal ends in 2021, as Mr Grayling has previously mooted, LNER would then account for ‘a substantial proportion of the route miles travelled on the line’.

Questioned about how he would ensure the interests of other operators are protected, Mr Grayling highlighted the importance of the regulatory role, saying: ‘There are two things we have to keep separate. One is the pricing of access and the other is the allocation of access. There has to be a mechanism that precludes an organisation operating the track and the trains from excluding someone else.’

Asked whether a similar model could later be employed elsewhere on the network, the Secretary of State said: ‘That is possible. I am not going to dive in and make a massive change everywhere. We have already set a path towards greater alliancing in other parts of the network. Here we have an opportunity to go one step further and create a genuinely integrated operation. We can all then, as we see those take shape, say, “What is the best way to take this forward?”.’ 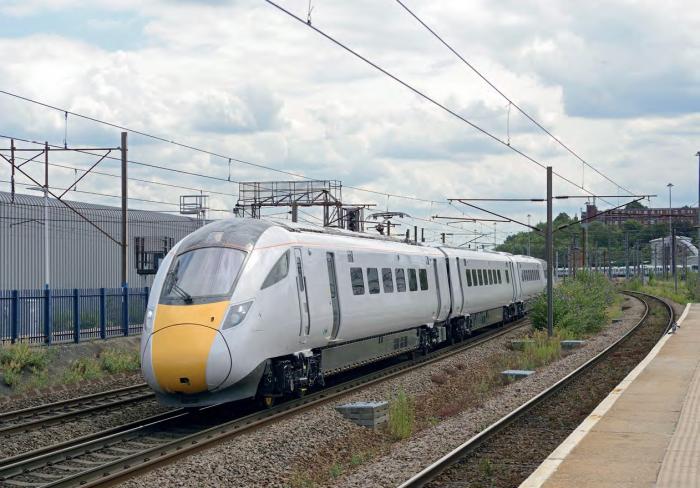 Azuma on test: so new that there is no evidence of summer fly squash on the nose, No 801102 sweeps through Hornsey forming working 5X71, the 13.22 King’s Cross – Doncaster Carr IEP depot, on 18 July 2018. Newton Aycliffe has begun production of East Coast Azumas; the County Durham plant will produce 45 of the 65-strong fleet. Antony Guppy