GC HSTs MAY BE USED TO COVER PRM WORK 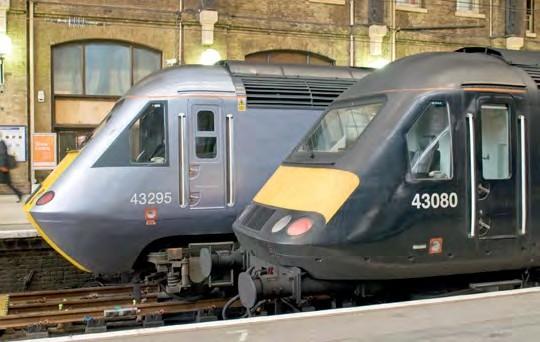 THE DEPARTMENT for Transport has extended the East Midlands Trains franchise, held by Stagecoach, until March 2019, with the likelihood of further extensions to follow.

DfT has exercised a pre-contracted one-year extension to the direct award contract which began in 2015 and was due to end in March 2018, according to a trading update issued by Stagecoach. The company notes

DfT has indicated its intention to negotiate continued operation of the franchise until at least August 2019, with ‘an option to extend the contract further by up to one year’.

DfT has been consulting on the specification of the next competed franchise, with its current franchising schedule indicating an invitation to tender will be issued in April 2018 and a new franchise awarded a year later. Consultation documents have suggested the next franchisee will be required to introduce a new fleet of bi-mode trains on the Midland main line, following the cancellation of electrification north of Kettering/Corby.

With the revised franchise schedule meaning acquisition of new bi-mode stock is likely to miss the deadline for meeting Passengers with Reduced Mobility requirements at the end of 2019, the DfT is scrambling to make arrangements to allow EMT to modify its HST fleet in time to meet the requirement.

Open access operator Grand Central is releasing its three ‘2+6’ HST sets at the end of this year, as it is to receive Class 180 DMUs from Great Western Railway, in turn released by the arrival of new Class 800s (p8).

Modern Railways understands the use of these HSTs by East Midlands Trains is being given serious consideration. Both EMT’s HSTs and the three from Grand Central would require significant modifications to comply with 2020 PRM regulations, including provision of power doors and retention toilets, although there is the possibility a derogation may be obtained to allow continued operation until a new fleet is introduced.

Sources suggest the GC HSTs would not only help the PRM situation, but would also help mitigate the impact of proposed Thameslink timetables changes in May 2018, with the increase in Thameslink services affecting EMT’s operation on the Midland main line. As we have previously reported, the first iteration of the timetable imposed journey time increases on EMT’s services. While the final impact is presently unclear, sources suggest EMT’s operation would be unsustainable without additional rolling stock.

It is understood that Alliance Rail, which owns GC, was considering using the three HSTs on its planned open access service between Blackpool and London, but it has abandoned this plan in favour of using Class 91s and Mk 4 carriages released by Virgin Trains East Coast (p8, July issue). Alliance’s original plan was to procure new Pendolinos, but difficulties with doing so mean it has submitted a revised application to the Office of Rail and Road incorporating the ‘91’-plus-Mk 4 rolling stock plan. Tony Miles