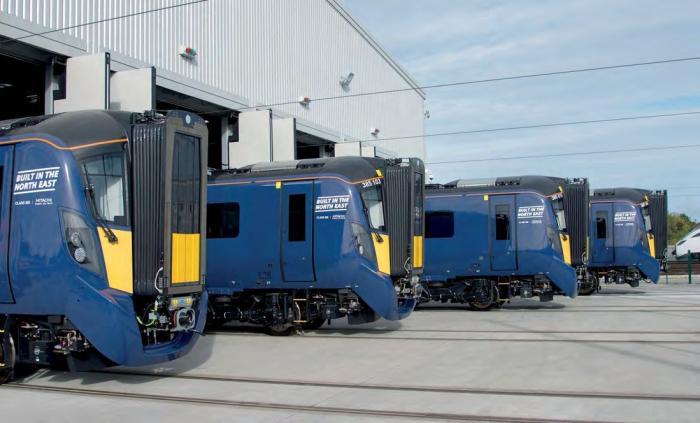 HITACHI HAS presented the first Class 385 EMU to be built at its Newton Aycliffe plant in County Durham. The manufacturer is supplying a total of 46x3-car and 24x4-car units for ScotRail, for services in the Scottish central belt. Three-car set No 385004 was unveiled alongside three partially completed sets assembled in Kasado, Japan. The unveiled unit was also the first to be fitted with seating.

The trains, based on Hitachi’s AT200 platform, are fully compliant with accessibility regulations. Hitachi says 71% of all parts are supplied from the UK, including windows, pipework and many of the internal fittings. The bogies are supplied from Hitachi’s plant in Naples, the wiring looms from a Hitachi plant in China whilst bodyshells, traction equipment and air conditioning units were shipped to the UK from Hitachi in Japan. The ‘385’ fleet is being assembled at Newton Aycliffe alongside Class 800 and 801 Inter-city Express (IEP) units, and for both fleets assembly of each vehicle takes 30 days or 2,100 build hours.

Kasado-built units No 385002 and 385101 were in Germany during October undergoing ride stability and wheel rail interface testing, an option taken up due to lack of access to tracks in the UK. A Hitachi spokesman told Modern Railways ‘We’re evaluating things like the stiffness of suspension against ride quality over a 10-week programme due to be completed towards the end of October’.

Hitachi also confirms testing is progressing on schedule for an entry into passenger service in December on the route between Edinburgh and Glasgow as long as the E&G infrastructure is completed and passenger certification is gained. The electrification of the route via Falkirk under the Edinburgh Glasgow Improvement Programme (EGIP) was originally due to be completed in December 2016, but has been delayed, chiefly due to issues concerning electricial clearances. The manufacturer was expecting to get access to the new infrastructure for testing in mid-October. Hitachi confirms all interference testing has been completed after initial tests in Japan and then in Velím, where sets ran with constant monitoring of electromagnetic interference levels. Class 385s have also been on test running in Scotland since December 2016 along with runs onto the East and West Coast main lines, so electrical compliance issues are resolved. 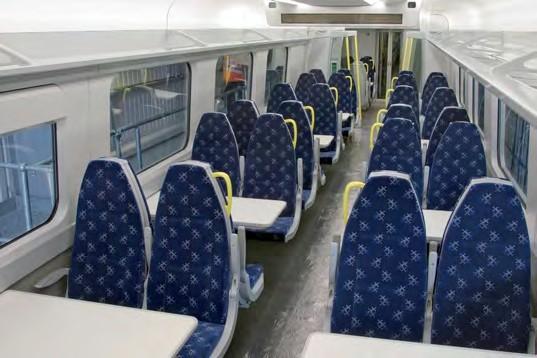 ScotRail plans to phase the Class 385 fleet into service gradually, although managing director Alex Hynes has made it clear this will not begin until the infrastructure is ready for them to operate. All 70 sets are due to be accepted for service by December 2018, although ScotRail notes some may not be in service at this time as this depends on when electrification of various routes is completed. Tony Miles