NEW NETWORK Rail Chief Executive Andrew Haines has told the House of Commons Transport Committee he is passionate about putting passengers first, but is ‘not sure Network Rail is perceived as doing that at the moment’. Asked about his ambitions on joining NR, Mr Haines said he wants to continue the company’s strong safety record, reverse the long-term performance decline and for NR to become more agile as an organisation.

Mr Haines told the committee day-to-day operation of the railway will be ‘front and centre’ of his approach leading NR. ‘The industry has got itself into a position where we’ve had seven sustained years of performance decline and think this can’t be dealt with – but I don’t believe that’ he told the committee.

Mr Haines reported his surprise at the loss of operational skills during his time away from the railway industry (he has spent the last eight years at the Civil Aviation Authority) and suggested this is a key factor in managing performance. ‘We need to build skill sets around how we manage the railway during disruption’ he told the committee. He suggested this should cover both Network Rail and train operators, highlighting his dismay at the fact Network Rail has never had an operations apprentice. ‘As an industry the quality of our performance analysis has not moved on – there needs to be a real analytic approach to every delay’ he added. ‘An area of urgent priority for me is how to build that capability.’

Andrew Haines believes Network Rail has only just started on its devolution journey. ‘We’ve made a good start but there is a long way to go’ he told the committee. ‘We had devolution but it was to a templated organisation so that the Route Managing Directors had to have exactly the same organisation, for example. A lot of the approvals are still required centrally. It doesn’t yet feel to me like a fully devolved organisation. It was the pace at which Mark [Carne] thought we could go – I think we sometimes talk it up more than perhaps we’ve delivered. There was merit in him being cautious, but I think we’ve sometimes oversold how much devolution there has been.’

Mr Haines told the committee devolution would allow a much more responsive approach to fixing problems. ‘Devolution will give greater efficiency providing we’re serious about it and we can get real benchmarking in. To do that you’re going to have to give up a lot of the cost to the Routes. I think we will allow more innovation if you don’t need as much central control and we will make individual Routes more accountable for responding to funders.’

The Chief Executive suggested, citing the different dynamics of Scotland, Wales, the North and the Midlands, that ‘you cannot really respond to those legitimate regional stakeholders if you try to retain so much at the centre’. As an example, Mr Haines said he supported the transfer of responsibility for the Core Valley Lines in South Wales to Transport for Wales. ‘One of the benefits of devolution is you can do some small-scale activities… if they think they can do a better job of that it will be useful.’

Discussing the Control Period 6 (CP6) settlement, Mr Haines told the committee the Draft Determination from the Office of Rail and Road ‘gave some very significant challenges’. ‘We’ve gone back to ORR with a counter-proposition which gets ORR most of where they want to be but not quite as far’ he explained. ‘We could deliver that settlement – it would be stretching and challenging but we could deliver that…it’s fair to say the delta between us is not enormous.’ 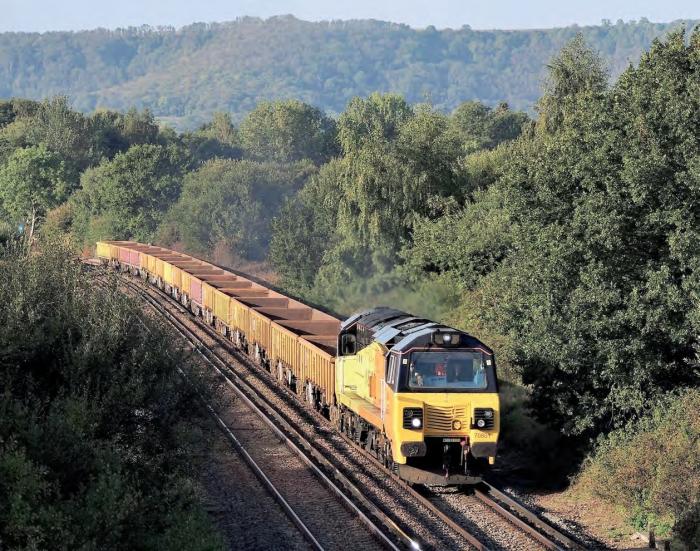 Class 70 on song: looking magnificent in the early morning light at Coldwaltham, near Pulborough, in the heart of the South Downs National Park, Colas loco No 70801 heads the 07.02 Eastleigh East Yard to Horsham Network Rail engineers bogie ballast wagons on 15 September 2018. This was the second of eight such trains scheduled to run within a period of 18 hours.
John Vaughan