They may be multinationals but national stereotyping still rules 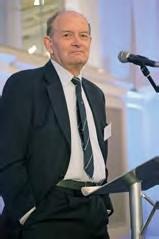 As soon as the start of procurement was announced, several of the potential suppliers of the HS2 VHST fleet issued statements welcoming the start of commercial hostilities.

Siemens was all practicality. The company has been planning for HS2 for some time and got straight down to business, announcing its Bid Director, Jo Hensher, and Head of Maintenance KevinClark.

Jo Hensher joined Siemens Rail Systems in 2013 and has been responsible for the development of the business’s strategy and chairing the cross-Siemens HS2 Focus Group. As I said, Siemens has aplan.

As for Kevin Clark, he joined Siemens in 2009 as a Maintenance Manager on the TransPennine Express project, becoming a Fleet Delivery Manager in 2014. Those Golden Spanner stickers beneath the cab windows of the Class 185 DMUs are among his credentials.

Interestingly, Siemens didn’t mention its product range, preferring to focus its comments on the need for the industry to work together to provide the trained staff required to deliver the project. According to Gordon Wakeford, Managing Director of Siemens Mobility, ‘Siemens remains committed to bridging the UK skills gap and supporting those aspiring rail engineers through our apprenticeship programme and the National Training Academy for Rail in Northampton’.

In contrast, Alstom’s Managing Director – Alstom UK & Ireland, Nick Crossfield, could not resist a display of Gallic pride in ‘the widest range of high-speed trains in the world, combining high-tech features with extraordinary passenger experience’. And if you’ve got it why not flaunt it?

But we also got the current investment in Alstom’s new UK industrial facility and training centre at Widnes ‘that will provide 15,000 days’ training a year’. ‘This is a massive opportunity for companies like ours to step up our commitment to UK jobs, skills and training even further’, Mr Crossfield added.

Bombardier had to be prodded for a comment. As with Alstom, it combined the group’s experience in the international high-speed rail market ‘with our proven and extensive UK design, manufacture, test, service introduction and maintenance expertise’.

In contrast to all this magisterial stuff, Hitachi launched a pre-emptive commercial strike, claiming that ‘where its UK-based competitors tend to focus on slower, less technologically complex regional and metro-style trains, Hitachi’s expertise in high-speed in Japan, Italy and now the UK is viewed as a major competitive advantage’. Yes, really.

So let’s deconstruct this claim. Who are these ‘UK-based’ competitors (plural)? Well, Bombardier, obviously. And what does that company know about high-speedrail?

Hitachi’s claimed Italian expertise refers to the Italian Railways ETR1000 Frecciarossa and was acquired through the takeover of Ansaldo Breda. But wasn’t the ETR1000 built by a consortium?

Hands up anyone who can remember the other member and technical leader of the consortium? Quite right, Fotheringham Thomas, it was one of those backwards European groups that tend to focus on slower, less technologically complex regional and metro-style trains, namely Bombardier. Under its Bertone skin, the ETR1000 is essentially Bombardier’s Zefiro VHST.

Siemens too has to be a UK-based competitor, since William Siemens arrived in the UK in 1843, took British citizenship in 1859 and was subsequently knighted by Queen Victoria. The company can also claim to run the only modern VHST in Britain in the form of the Eurostar Velaro units onHS1.

As for Alstom, while that firm is still trying to get back into the UK new train market, its traction heritage includes English Electric (Is this relevant? – Ed) that supplied 34 electric locomotives to the Imperial Government Railways of Japan under the Tokyo-Kobe electrification in 1925 (I should have known – Ed). 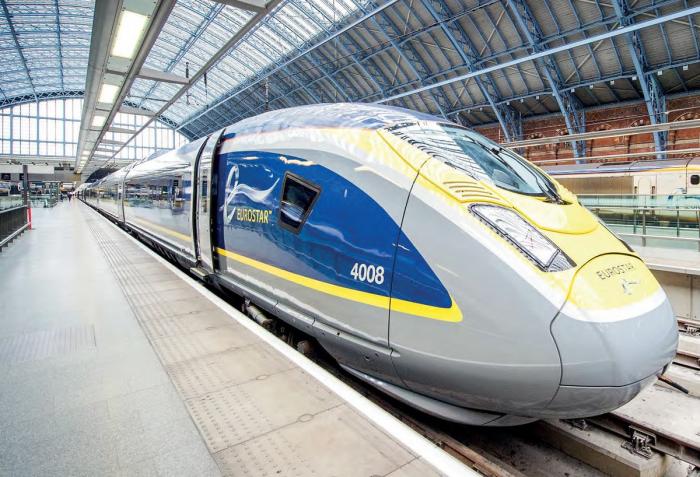 And apart from launching high-speed services in the UK with the Class 373 Eurostars, the Class 91 still holds the UK speed record on classic lines at 162.6mph. Oh yes, and French Railways’ record-breaking Alstom V150 test train covered more that 700km at speeds of 500km/h and above.

So, really, dissing the competition, which has collectively supplied more high-speed trains to more countries than you, does seem an odd commercial strategy. But, that apart, note the inclusion of Frecciarossa in the Hitachi CV

So a bullet train clone is unsuitable for HS2’s classic compatible sets that will run on the West Coast main line. This means that Hitachi will need to design a European-type VHST. But why go to all that trouble when you have acquired a proven 400km/h VHST design through your Italian subsidiary?

Noting that Hitachi and Bombardier have already joined forces to bid for London Underground’s New Tube for London, Old Ford’s Almanack predicts a similar marriage of convenience to bid for HS2. You read it here first.

Following last month’s item on the need to boost the UK-manufactured high-value content of imported new trains, I fired off this question to the aforementioned fabulous four. ‘Will your bid for the new trains for HS2 include commitments to increase the proportion of UK manufacture of those high-value systems and components that are currently imported with trains your company is supplying to the UK market? Any details of such proposed technology/manufacture transfer would be helpful’.

In alphabetic order, the replies were:

■ Alstom: ‘We are not currently supplying trains to the UK market – so this is only going to increase. The investment in Widnes is a great proving point for the serious of our commitment to the UK.’

■ Bombardier: ‘Our trains for the UK market have a high degree of UK content, including design, engineering, manufacture and procurement. We are currently looking at how we optimise our approach for HS2, encompassing both our UK expertise and our wider international capability and experience in very high-speed.’ 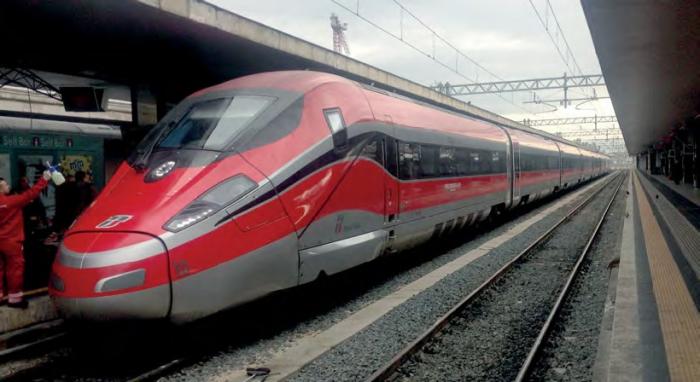 Built by a consortium: The Frecciarossa ETR1000, made by Bombardier and Ansaldo (now owned by Hitachi). Keith Fender

■ Hitachi: ‘We think it will be too soon to go into thesedetails.’

■ Siemens: ‘Siemens has a long history of creating value in the UK and we see no reason why an opportunity like HS2 would not justify investment in the UK and the rail supply chain to increase the use of UK manufactured high-value systems and components.’

So, a lot of cards being kept close to corporate chests, with Siemens by far the most positive. But we need to differentiate between a UK assembly plant, like Derby or Newton Aycliffe, and the origin of the high-value systems and components that go into and under the body shells.

While politicians love an assembly plant, long term it is a hostage to fortune and a potential rod for their own backs. True, over 5,000 new main line vehicles are due to be delivered in the next three years or so. But they represent nearly half the existing passenger fleet and will not need replacing for another 30 years.

According to the Rail Delivery Group’s latest forecast, the most optimistic scenario sees just over 20,000 new vehicles required over the next 30 years. Before the traditional feast and famine, that is 700 vehicles a year – say three production lines.

That is barely enough to keep two assembly plants in business. But, if Alstom or Siemens wins NTfL, they will probably be expected to commit to UK assembly. CAF is already talking of setting up some sort of UK presence.

Thus, when the feast ends, there will be more firms threatening ‘give us a contract or we shoot the kitten’. Which is why I believe the new focus should be on securing UK manufacture of systems and components, which can be exported. After all, when Alstom was still building trains for the UK, factories at Preston and St Ouen in France manufactured traction systems as an integrated operation.

(No kittens, metaphorical or otherwise, were traumatised in the writing of this item.) 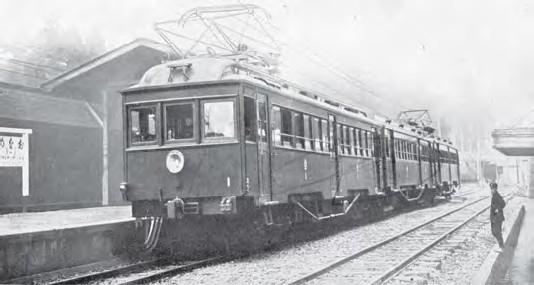 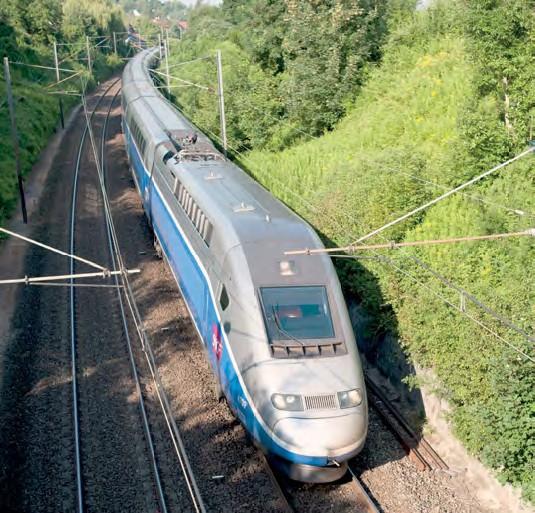 French high-speed train: Lyria Euroduplex from Alstom between Mulhouse and Belfort in July 2012.