Industry comes together for Women in Rail awards

OVER 600 people from across the rail industry joined together at the iconic Roundhouse in Camden on 30 September for the fourth Women in Rail Awards. The event followed hot on the heels of Women in Rail’s flagship Big Rail Diversity Challenge, which took place earlier in September.

The Awards provided an opportunity to celebrate colleagues, teams and companies who during the pandemic continued to work hard to support others and to help create a more gender balanced, diverse and inclusive work culture in the industry.

Arriving guests were greeted by a performance from the Southeastern Choir, before Adeline Ginn MBE opened the ceremony. As Founder of Women in Rail, the ceremony marked her last official appearance as Chair of the charity (see box). A pre-dinner speech followed from Bernadette Kelly, Permanent Secretary at the Department for Transport, while the awards themselves were hosted by journalist, broadcaster and TV presenter Naga Munchetty.

Nine awards were presented across five individual and four team and corporate categories. Women in Rail reports a remarkable calibre of nominations, with over 300 entries featuring a wide range of individuals, teams and companies in the railway sector, many of them from male allies nominating their female co-workers. In addition, an Outstanding Contribution Award was presented to Southeastern’s Darren O’Brien for initiating ‘Rail to Refuge’, an initiative aimed at securing free train tickets for women, men and children escaping domestic abuse to refuge accommodations and which, to date, has helped get over 1,348 survivors, including 362 children over five years old, to safety.

The judges admitted to having a very difficult task selecting who should be shortlisted and ultimately win, commenting: ‘It was truly inspirational to read about the amazing steps people from our industry have taken to reach out to others in time of need and, during the pandemic, continue to work hard to create a fairer and more inclusive sector.’

The 2020 awards could not take place in person due to the pandemic, so the winners were called on stage for a belated, but huge, round of applause.

Adeline Ginn, Women in Rail founder and Legal and Marketing Director and Head of EDI at CPMS – Egis, said: ‘This year’s Women in Rail Awards was very special. We celebrated the passion for equality and fairness in our industry, but also all those who stood up for our railway family values during the crisis.

‘A huge thank you to everyone who supported and attended the ceremony and warm congratulations to all the winners and shortlisted nominees.’ 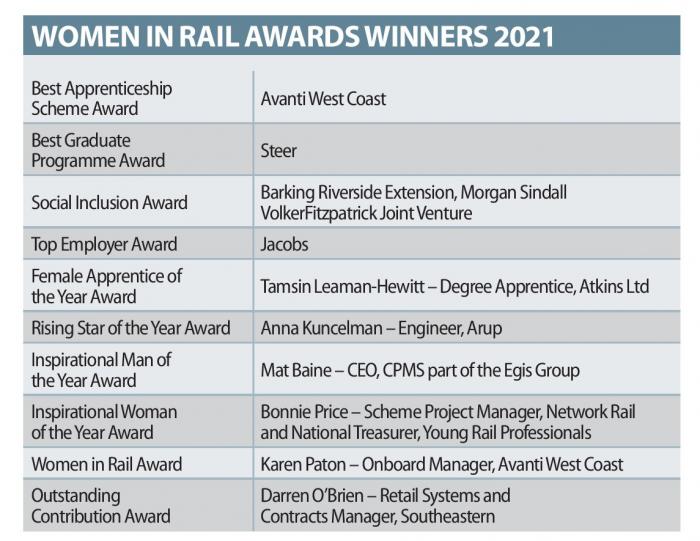