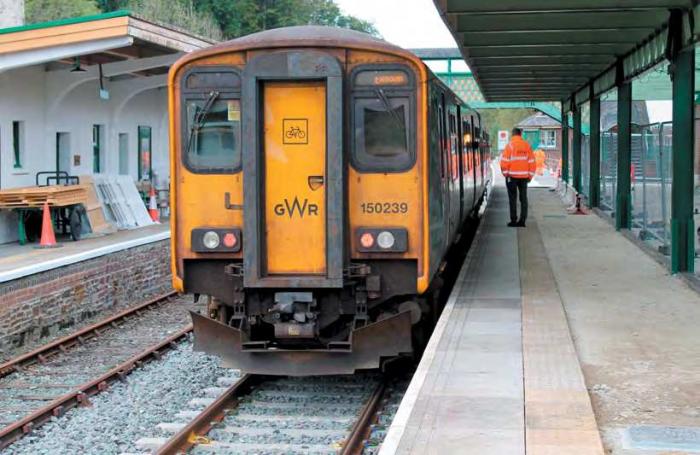 Destination Okehampton: on 22 October 2021, GWR Class 150 No 150239 stands at Okehampton station after arrival on a driver training run. The reopened railway is being warmly welcomed in the South West.
Andy Roden

That excitement was tangible when I joined Network Rail and Great Western Railway on a driver training run from Exeter a couple of weeks before the formal opening.

There was a real sense of anticipation and achievement from the railway staff, and from people in the local community in Okehampton and nearby Tavistock. It is a really pretty railway, and I’d expect it to be a tourist attraction in its own right as well as a vital link for the region.

In just a few months, Network Rail, Great Western Railway and contractors have rehabilitated an 11-mile stretch of track that had been little used for years and brought it up to operational standards. And while there is no question this is a much easier prospect than doing so with a disused formation, the challenges have been formidable. Track, drainage and structures all needed extensive work, environmental mitigations were significant – and threading the service through congested Exeter St David’s posed a stiff challenge to timetable planners.

That it has been done so quickly and on budget is huge tribute to the teams involved, who worked in a close cross-industry partnership to deliver the first of the Government’s much-vaunted Restoring your Railway schemes.

It is the first demonstration of its kind of the Project Speed approach, and it has worked extremely well.

The cornerstone of reopening the Dartmoor line has been to do what is needed to the required standards and eliminate the gold-plating so often associated with rail projects.

Where track was up to standard, it was left in place. There has been no money spent on raising linespeeds beyond those needed. GSM-R testing was undertaken on driver training runs, saving a useful six-figure sum.

At every stage, forensic attention has been paid to costs and schedule.

Success such as this should give Government confidence that Project Speed is delivering results and that the rail industry can work closely together and provide taxpayers with value for money. That effect should not be underestimated.

It is also important to note that this reopening isn’t just a pure railway scheme: buses serving Okehampton station will connect with nearby Tavistock, spreading the connectivity benefits further. That picturesque and heavily congested town is celebrating its success in securing Government funding to examine the merits of a Tavistock to Plymouth service, which would entail the building of around five miles of railway from there to Bere Alston.

The implications of this scheme could be highly significant. By demonstrating how disused routes can be rehabilitated into the national rail network at comparatively low cost, the Dartmoor line could be a template to enhance regional connectivity across England, Wales and Scotland. It isn’t just about reopening railways: many of the practices which got the Dartmoor line reopened could be applied elsewhere on the network. In what is inevitably going to be a highly cost-constrained railway for the foreseeable future, this approach is likely to become the norm.

PHASE ONE OF THREE?

Back in Devon, it has taken many years for Okehampton to regain its regular rail service – the result of tireless campaigning by supporters, local authorities and MPs – and the celebrations on 20 November were expected to be huge. For the first time in two generations, there is a regular rail link serving Okehampton and the area around it. For those without cars it will transform access to work, education, healthcare and leisure, while there is already a growing initiative to encourage tourists to use the railway to access the northern side of Dartmoor.

It has whetted the appetite for more. Locally and regionally, there is a strong desire to kick on, connect Tavistock and then tackle the 20 or so miles that would complete a second through route from Exeter to Plymouth. Over the last two years I’ve been working on that case pro bono with a team of experts. Our work suggests the full route offers better revenue potential than branches at either end, unlocks the South West to rail freight, and would make the longterm resilience programme for the main line quicker and cheaper by enabling longer engineering blockades than could currently be contemplated. That it would act as a diversionary route when the main line is closed by poor weather or for maintenance is almost secondary to the step-change in regional connectivity it would offer - if, of course, the case is credible in social, economic and environmental terms.

A decade ago, I’d have viewed full reinstatement with scepticism. It is now official policy of Devon County Council to regard Okehampton as Phase 1, Tavistock to Plymouth as Phase 2 and the central section between Tavistock and Okehampton as Phase 3. The reopening of the route to Okehampton has reawakened local interest in and awareness of the benefits of railways and their ability to act as a catalyst for wider social, economic and environmental benefits.

The Spending Review appeared to take a rather disjointed approach to the decarbonisation and climate change challenges we all face: a cut in domestic Air Passenger Duty flies in the face of cutting emissions. The bottom line seems simple, however. We all need to drive less and use sustainable transport much more. If that really is the case, reopening the railway between Coleford Junction and Okehampton surely must be the first of many schemes which expand the rail network where there is a credible case to do so to reach as many people as possible.

Okehampton’s reopening may very well be regarded as a watershed moment for England’s rail network in decades to come.