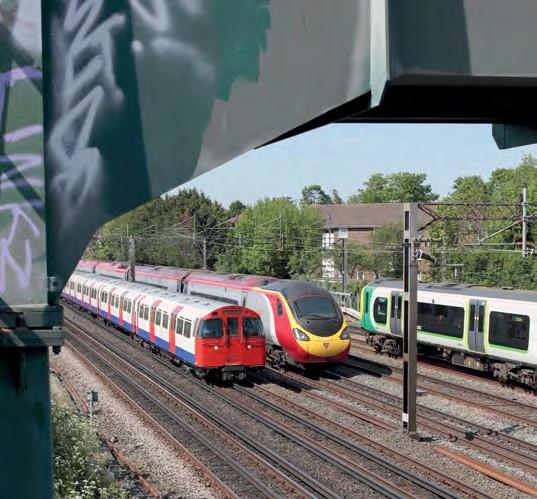 Inter-city overtaking LSE as the growth driver: this is Northwick Park on the West Coast main line on 10 May 2017. A Bakerloo Line service bound for Elephant & Castle meets No 390011 City of Lichfield racing north with the 15.07 London Euston – Liverpool Lime Street and overtaking No 350376 as the 15.04 Euston – Tring.
Antony Guppy

The London and South East sector saw a fall of 0.5% in the number of journeys to 1,197 million. While Govia Thameslink Railway had the largest share of journeys among any operator, industrial disputes, staffing issues and planning cancellations have resulted in a 1.9% decrease in its passenger journeys during the year. South West Trains, the second largest operator, also saw a notable decrease of 3.2%.

In contrast, the opening of Chiltern Railways’ new line to Oxford Parkway and later to Oxford city centre has boosted that operator’s passenger journey numbers by 7.9%.

Both the regional and long-distance sectors saw significant increases in passenger volumes of 3.9% and 3.8% respectively, both reaching record highs. ORR says there was also a shift in ticket types used, with season ticket journeys down by 2.9% on the previous year but advance ticket journeys up by 9.7%. For season tickets, this is the first time since the mid-1980s that the type has seen its market share fall below 40%.

The non-franchised sector recorded a 4.0% increase in passenger journeys, reaching two million during the year, a record high.

During the final quarter of 2016-17 (January to March), journeys across the UK were down 0.4% on the same period in the previous year. This was driven by a 1.9% decrease for the London and South East sector, where c2c, Chiltern Railways and London Overground were the only operators to record a year-on-year rise in passenger numbers. Journeys on GTR were down 6.6%, but the operator still carried more passengers than any other.

Passenger revenue growth in 2016-17 was the slowest for 16 years at 2.5%, rising to a total of £9.5 billion. All three sectors recorded their highest revenue figures since the time series began, but with slowing growth.

The number of passenger train kilometres travelled by revenue-earning services fell for the first time since the time series began in 2010-11. Totalling 520.9 million, the decrease was 0.2% on the previous year, with GTR again recording the highest figure but seeing a notable fall of 7.3%.