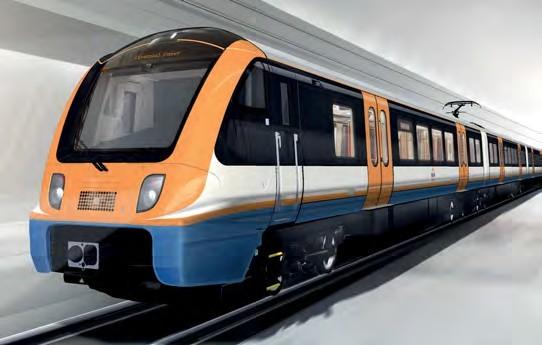 TRANSPORT FOR London is proposing the acquisition of nine additional Class 710 EMUs from Bombardier to support the London Overground extension to Barking Riverside and an enhanced service on the East London line.

Tflhas ordered 45x4-car units from the manufacturer for the Gospel Oak to Barking line, Watford to Euston route and West Anglia services out of Liverpool Street.

Approval for the plan to purchase additional units was being sought from TfL’s Programmes and Investment Committee in mid-October. Utilising priced options under the contract with Bombardier, TfL’s preferred option is to order an additional 42 vehicles, comprising 6x5-car and 3x4-car units, which would be delivered from November 2018. This would trigger a switch of units across the London Overground network: the six five-car units would be used on the North and West London lines, releasing six five-car Class 378s to the East London line to support an enhanced service. One four-car unit would be used on the Watford to Euston line, which along with retention of an additional Class 315 EMU would release a further two ‘378s’ to the ELL. In total, eight ‘378s’ would be released for the ELL service; Tflsays this route must use these units due to the operational and safety constraints posed by operation through the ELL core section. The remaining two additional four-car units would support the extension of Gospel Oak to Barking services to Barking Riverside.

The current ELL service operates at 16 trains per hour (tph), but Tflsays the line suffers severe levels of crowding during peak periods. A capacity increase to 20tph is targeted for May 2021 using digital signalling, with funding of £6 million received by Tflto develop an outline business case from the £450 million allocated by the Chancellor to a Digital Railway fund in the 2016 autumn statement. Additional stabling at Norwood would also be required to support the frequency increase, and Tflhas made a bid to the Department for Communities and Local Government Housing and Infrastructure fund for the additional infrastructure works.

The Transport and Works Act order for the 4.5km Barking Riverside extension was approved by Transport Secretary Chris Grayling in August, with construction set to begin in summer 2018 and opening planned for late 2021. The service to Barking Riverside would be an extension of the current 4tph on the Gospel Oak to Barking line, on which electric services using the new ‘710s’ are due to begin next spring.

While the additional units would support the Barking Riverside extension and ELL enhancement, Tflsays they could initially be used to support an enhanced service on the West London line or sub-leased to other operators. If the former is chosen, a plan would need to be developed to maintain the enhanced West London line service once the units are transferred elsewhere.

Meanwhile, construction of the first ‘710’ from the original order has been completed by Bombardier at its Derby factory. The first train began static testing in August, with the second and third trains under construction, according to the report presented by Transport for London’s Commissioner Mike Brown to TfL’s Board on 19 September.

The aim is that the first of the 45x4-car units will enter service on the Gospel Oak to Barking route in March 2018, following the delayed completion of electrification work by Network Rail, now scheduled for January, before being introduced on other routes that summer. Tflhas ordered two variants of the Class 710 – 31 of the units (Class 710/1) will be AC overhead-only versions for the West Anglia and Romford to Upminster lines, with the remaining 14 (Class 710/2) dual-voltage units for the Gospel Oak to Barking and Watford DC lines.