ARRIVA TRAINS Wales has revealed it ran more than twice as many services in South Wales during July and August this year than in the same two months in 2004, the first summer of its 15-year franchise. The increase in services was achieved despite only a small increase in the size of ATW’s fleet; there has been little flexibility for adding trains to the fleet, since the Wales and Borders franchise was awarded in 2003 on the assumption of no growth.

On local routes within and into Cardiff, ATW operated 14,237 services in July and August 2017, compared with 6,244 services in July and August 2004. ATW’s services between Cardiff, Swansea and West Wales increased from 753 to 1,697. The region has benefited from Welsh Government investment in reopened lines, new stations and redoubling east of Llanelli. Network Rail has also invested in resignalling, track alterations and additional platforms at Cardiff Central and Cardiff Queen Street.

On the Marches line, from Newport to Shrewsbury via Hereford, ATW operated 2,116 services in July and August, compared with 1,777 in those months in 2004. Two-hourly Cardiff-Holyhead workings were introduced in 2005, supplementing the hourly Cardiff-Manchester service.

Cambrian workings increased from 1,777 to 2,116. The Welsh Government introduced additional services on the Cambrian main line in 2015.

North Wales saw only a 5% increase in services over the same period. Frequencies at most stations are largely unchanged, with Borderlands trains into Wrexham Central still hourly, while comparable routes into Cardiff now have several trains per hour. The Welsh Government’s first significant rail infrastructure investment in North Wales, redoubling north of Wrexham, was completed in April 2017, which was too recent for the improvement to have any effect on service numbers in July and August.

ATW operated 916 services per day on average in July and August this year, a 25% increase from 2004. ATW said this was the highest number of trains for Wales and Borders passengers since the Beeching axe of the 1960s. Passenger numbers had increased from 18 million per annum in 2003 to more than 30 million this year, said ATW. Rhodri Clark 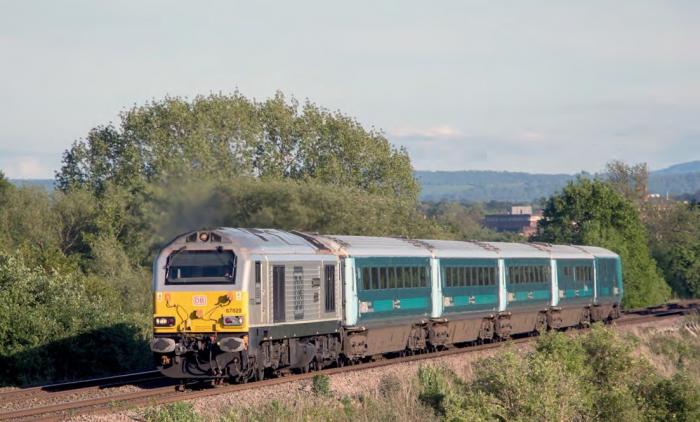 Welsh Government express: No 67029 heading up Hencote Bank en route to Holyhead on 23 May 2017.
Kyle Rushton