A TEAM led by designer Feilden Fowles has won an international competition to create a new Central Hall for the National Railway Museum in York. The design concept references the history of locomotive roundhouses and railway turntables with its central two-storey rotunda, which will be clad with recycled patinated copper and lit with high clerestory glazing. The designers say the rotunda will unify the diverse buildings that make up the existing site.

Linking the museum: the new Central Hall will join together the halls currently separated by Leeman Road, which will be diverted.

On entering this new welcome and orientation space, the visitor’s gaze will be drawn upwards to the engineered ceiling, stitched together with radials of UK-sourced Douglas fir, described by the competition jury as ‘a spectacle’. A first-floor balcony will offer views of York, while at ground level five different portals will lead to different parts of the museum.

A new double-height gallery, the Exhibition Hall, will use the same grid as the existing Station Hall and celebrate its brick arched openings. 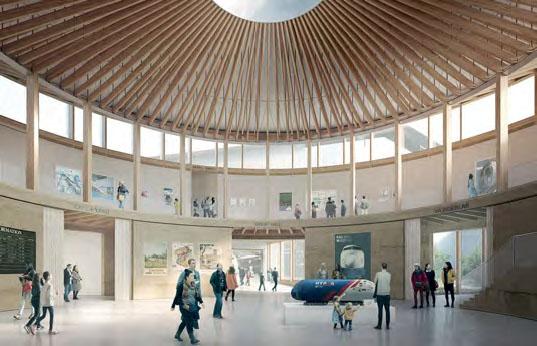 Roundhouse design: the proposed look of the new Central Hall at the NRM.