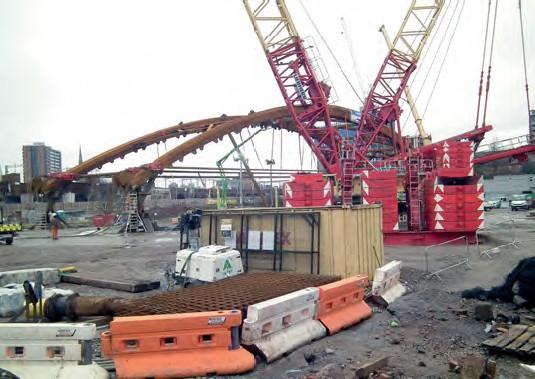 Ready for launch: the arch section for the river Irwell bridge awaits use on 29 January 2017. Mike Haddon

A KEY milestone in the Ordsall Chord project was due to be reached on 21 February when Network Rail planned to install the ‘network arch bridge’ crossing the river Irwell.

The 600-tonne bridge support has been designed by architect BDP and manufactured by Severfield. Individual sections have been welded together at the site and were due to be lifted into place as one piece via a tandem crane lift.

The Ordsall Chord is a 340-metre connecting viaduct that will link Manchester’s Piccadilly, Oxford Road and Victoria stations, enabling new direct services to run through to Manchester Airport. It is due to open for passenger services in December 2017. Network Rail has formed an alliance with contractors Amey, Skanska, Bam Nuttall and Siemens to construct the chord.