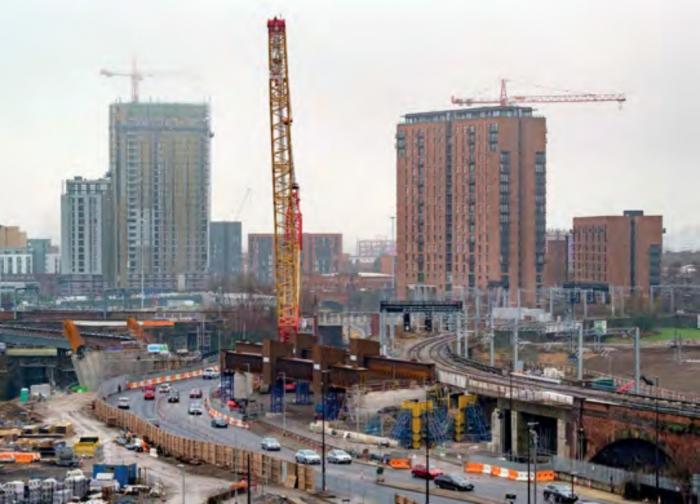 Getting on: view of the progress with the construction of the Ordsall Chord on 17 December 2016. Russell Wykes

THE LONGEST and most complex stage of the project to build the Ordsall Chord in Manchester was completed during a 15-day blockade over Christmas and New Year, Network Rail reports.

The chord will link Manchester’s Piccadilly, Oxford Road and Victoria stations, enabling new direct services to run through to Manchester Airport. It is due to open for passenger services in December 2017.

During the holiday period 250km of new signalling cables were commissioned, and engineers installed 3km of new overhead wiring, eight new sets of switches and crossings and 1km of new track. 500 tonnes of new steel was lifted into places for two new bridges. The closure also saw the reconfiguration of existing tracks, enabling the chord to connect with the new track layout ready for its opening. Other works included the installation of two new bridges, renovation of Water Street bridge, widening of Castlefield viaduct and modernisation of the Ordsall Lane track layout.

Network Rail has formed an alliance with contractors Amey, Skanska, BAM Nuttall and Siemens to construct the chord.