The railway is for EVERYONE

I’m delighted to be welcoming you to this LGBT+ special feature for this month’s Modern Railways.

I believe the railway is for everyone, and that as a rail industry we have a responsibility to create a workforce that reflects the diversity of modern Britain. We know workforces that are diverse are more productive, better engaged and safer. And we can deliver a better service to all our customers if we can understand their needs.

Across Britain’s railway, an enormous amount of great work is happening within Network Rail, passenger and freight operators and our suppliers to enable LGBT+ colleagues to bring their full selves to work, some of which is showcased in this feature.

As a gay man, I’m proud to be the Exec sponsor for Archway, Network Rail’s LGBT+ employee network, and it is open to everyone across the rail industry.

I think I am a better leader because I now share more of myself with my colleagues, which means I can be more authentic at work, which in turn means that people trust you more and you build better relationships with the people that you work with. I think if you are honest about who you are, you can be a happier person and you can be better in the workplace as well, and then you can help others to take that step as well, if that’s what they want to do.

The more senior you are, the more you have a responsibility to be visible, to create safe spaces, to bring together people with lived experiences and to celebrate the diversity we bring to any organisation.

Seemingly small changes can have a big impact in a short space of time. Recently in Scotland we had an hour for LGBT+ colleagues to discuss LGBT+ history month. I cannot tell you how rewarding it was to see people who previously chose to remain in the closet chatting away to each other openly.

One of the attendees, a gay man, said: ‘I could never have imagined when I started on the railway nearly 37 years ago that I would be on a call like this with my manager and his manager's manager!’

As part of our diversity strategy, we have created spaces for people with lived experience to have a cuppa and a chat. This is proven to be very effective at supporting people to be more open about themselves having spent, in some cases, their entire railway career on a ‘don’t ask, don’t tell’ basis. Isn’t that sad?

But we can change it, we can be the catalyst. Let’s be clear, there are a lot of gay people in the railway, it’s visibility that could be better. Let’s nudge things along in the right direction. It's OK to be gay in Britain’s rail industry in 2022; we’ve got your back! 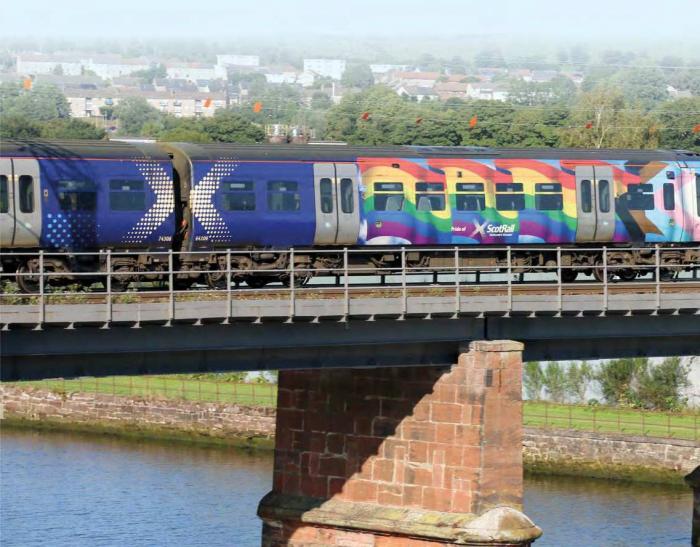 Pride of ScotRail: bearing ScotRail’s rainbow livery, No 334006 crosses the Leven viaduct between Dumbarton Central and Dalreoch on 26 August 2021 with a Helensburgh Central to Edinburgh Waverley service.
IAN LOTHIAN