THE RAIL Delivery Group, on behalf of the industry, has provided advice to the Scottish Government on investment plans north of the border during Control Period 6 (2019-24) in a document entitled ‘Scotland’s rail infrastructure’.

Electrification is suggested for the lines to East Kilbride/ Barrhead, Kilmarnock/Barassie and the Maryhill line. Grade separation at Greenhill Junction (west of Falkirk), enhancements in the Carstairs area and on the Dunblane to Perth corridor also feature, along with four-tracking of the East Coast main line between Prestonpans and Drem. Some of these schemes are proposed for CP6 and others for CP7 (2024-29).

Schemes supporting economic and social objectives include enhancements on the routes between Inverness/Aberdeen and the central belt; completion of the Aberdeen to Inverness improvement scheme to deliver an hourly service on the whole route; and upgrades to the Far North line to Wick and Thurso.

A new platform is proposed at Dunbar to relieve capacity constraints caused by the current single platform layout.

Train lengthening on the Fife to Edinburgh, Glasgow low level and Ayrshire and Inverclyde routes is proposed; the report says this would not require infrastructure investment. 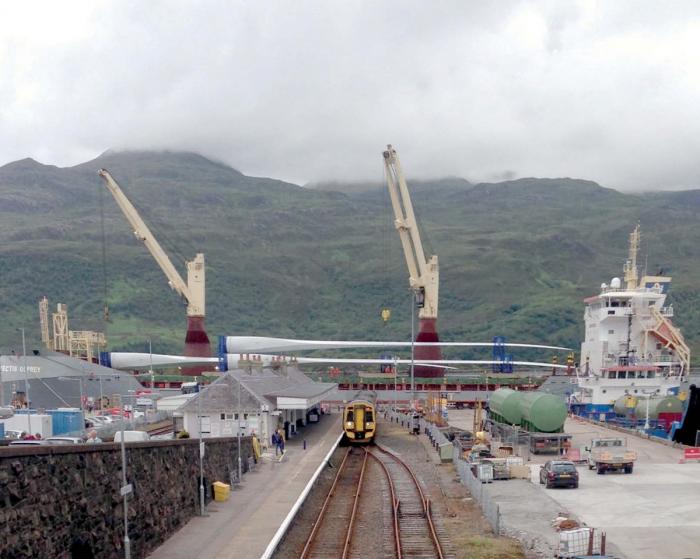 Mountaintops in the clouds: one proposal being put forward by the Highlands & Islands Transport Partnership is that some sections of the Kyle of Lochalsh line should be combined with the parallel A87 road so that the combined solum could be better protected from rock falls, with the four trains a day signalled between road traffic. Here unit No 158712 is seen at Kyle on 13 June 2016, as wind turbines are secured onto a vessel in the loch behind the train. Henry Yuill