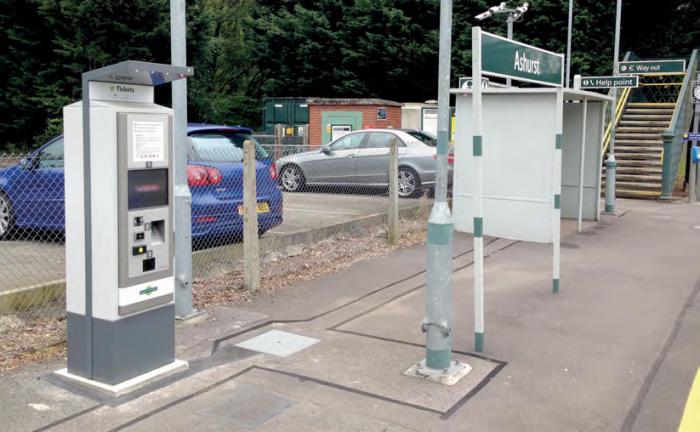 Ashurst, Kent: after several years when the smartcard reader by the bridge (inset) was the only form of revenue collection at this branch line station, in the past couple of months Southern has admitted the continued dominance of tangerine tickets by installing the Scheidt & Bachmann ticket vending machine seen on the left here. James Abbot 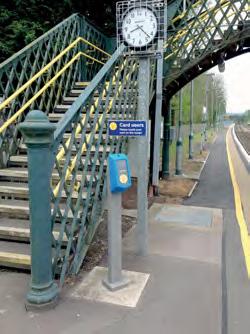 In his 2011 Autumn Statement, the then Chancellor of the Exchequer allocated £45 million to develop smartcard-based flexible ticketing in London and the South East. March 2012 saw the Department for Transport outline its plans for spending this windfall and in the May 2012 ‘Informed Sources’ there was a critical (what else? –Ed) analysis of the proposal.

According to the DfT presentation, the intention was to introduce ‘smart flexible season tickets’ with the aim of giving National Rail passengers more choice about ‘when and how they travel’. This would, potentially, lead to reduced overcrowding on trains. Under the South East Flexible Ticketing (SEFT) scheme, the new ticket facilities would be rolled out by April 2014.

Of course, London already had its own flexible smart card in the form of Transport for London’s ‘Oyster’ from Cubic. But since 1998, DfT had been sponsoring the development of its own Integrated Transport Smartcard specification by ITSO Ltd, a company limited by guarantee – then all the rage. 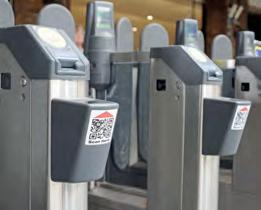 Ticket gates: these examples are at King’s Cross, with readers for barcode tickets. Paul Bigland

By 2008 DfT was making the introduction of ITSO-compliant smart cards a requirement for new franchises. In an action replay of the R100 and R101 airships, we had private sector Oyster up against government-sponsored ITSO.

One of the malign effects of this rivalry was DfT’s refusal to agree extension of Oyster into the suburbs. A personal case in point was Great Northern, where DfT vetoed First Capital Connect’s proposal to extend Oyster Travelcard and Pay-as-You-Go (PAYG) to St Albans, Welwyn Garden City and Hertford North stations.

When I got my local MP to challenge this, he was told ‘Oyster carding is one means through which the Government wants to see smart and integrated ticketing rolled out more widely across the country. The Government wants to enable most public transport journeys in the country to be made using smart ticketing by the end of 2014. In view of this goal, as you will be aware, a growing number of ITSO-compliant smart ticketing schemes are in operation or development across England. The Government is also working with TfL to deliver new ITSO-compatible smart readers across the London Oyster estate’.

For ‘working with’, read DfT, separately, paying TfL £65 million to make the Oyster gates and card readers able to cope with ITSO smart cards. In a related deal, Oyster was being extended to more National Rail suburban stations, giving rise to the Gilbertian situation where Hertford East has Oyster but Hertford North has not.

When ‘Informed Sources’ returned to the subject of SEFT a year later, the sub-heading ran ‘Is SEFT DfT’s new IEP?’. SEFT would now embrace 12 train operators with a potential half a million season tickets. The aim was to start with the full range of standard tickets and the March 2014 roll-out had slipped to summer or autumn.

And so SEFT bumbled on, until in December 2015 a Parliamentary written question on whether DfT still planned to progress SEFT ‘and if not, why not’, got the reply: ‘the SEFT programme is proceeding with contractual obligations for five train operators who run commuter services into London. Together, these five train operators cover 73% of the annual season ticket market’.

But, significantly, the answer continued, ‘We are discussing with the Rail Delivery Group and the remaining train operators the best and quickest way to deliver smart and more flexible ticketing for commuters in the south east’. Reading between the lines, SEFT would end with the roll-out of the ITSO-compliant smartcard schemes being developed by the five main London commuter operators.

This was confirmed at the end of March 2016 when Jenni Borg, the DfT civil servant who had been responsible for SEFT under the impressive job title Head of Transforming Ticketing, Payments & Mobility, announced that her unit had been ‘disaggregated’.

And that was that, until on 20 April this year the National Audit Office published the report of its investigation into DfT’s management of SEFT. According to NAO, DfT has not delivered the original ambition of the programme, which was to improve the experience for passengers and reduce the cost of selling tickets.

DfT had paused the SEFT programme three times and reset its outputs and funding twice, with the scope reduced and the budget revised each time. The first pause was in December 2012, following the rejection by FirstGroup and Stagecoach of the proposed central back office.

Following concerns raised by a consultants’ review in 2013, DfT reset the SEFT programme and increased its budget to £80 million, largely to cover the cost of increased programme management capability. Procurement was launched in April 2013.

In April 2016, the programme was reset again, with the cost reduced to £61 million to deliver a substantially reduced scope. This, says NAO, followed a ministerial decision that the rail industry should take over the lead in developing smart ticketing solutions from DfT. At that time, DfT had estimated that it would cost a total of £96 million, including the £54 million already spent, to deliver the full scope as set out in the 2014 business case.

Meeting the original SEFT objectives, notably part-time season tickets, would also involve provision of additional ticket barriers and validators. These would have to be funded by either DfT or the TOCs through changes to franchise agreements.

SEFT has cost £54 million compared with the original budget of £45 million, and of this £26 million was spent on the management of the programme by DfT and the Rail Delivery Group’s Rail Settlement Plan arm. The remainder paid for the one positive to emerge from SEFT – hardware in the form of a central back office plus infrastructure such as ticket validators, ticket barriers and ticket vending machines. Add in the Oyster upgrade and the total is ‘at least £120 million’.

Even getting the central back office through was a considerable achievement. At the 2015 Transport Ticketing Global conference, Jenni Borg had described the problems of working with 12 competing franchise operators. In particular, she noted the resistance to a central back office for the SEFT area which, at that time, was ‘not something that any of our stakeholders wanted – unless it is their back office’.

But the central back office was finally implemented. Any TOC can access this to process its own smart ticketing schemes, covering a wide range of ticket and fare types.

According to the Rail Delivery Group, the central back office is currently using around 5% of its capacity. This ‘in house’ capability is being promoted to TOCs across the network, and by March 2017 two franchises outside the south-east of England were using the facility.

Responding to the NAO report, DfT described SEFT as an ‘ambitious programme to lay the foundations for smart ticketing for rail passengers across the country’. DfT added that SEFT means more than 400,000 season ticket holders now have access to paperless tickets.

Even so, only 8% of all season ticket sales within the five train operating companies participating in SEFT were on smartcards for the 12 months to March 2017. According to NAO, DfT attributes these low levels of take-up to early problems with passenger experience and lack of promotional and marketing activity.

Speaking of which, anonymous card readers appeared on Welwyn Garden City station last year. Subsequently I have spoken to passengers using Govia’s perversely named ‘the Key’ card, and very useful they find it. That said, I suspect most of the travellers through my home station would rather have the well-promoted Oyster.

What SEFT tells us is that Government should never be allowed to run projects involving technology. Compare and contrast SEFT and Oyster.

SORRY TO REMIND YOU, BUT…

‘But for a £45 million programme which is due to be rolled out by April 2014 – 24 months away as I write – it all seems very impromptu, not to say rudderless. Someone has to get a grip and that someone will need expertise in revenue allocation and secure payments.’ ‘Informed Sources’, May 2012