DELAYS IN mast designs and breaches of two sewers are among the issues affecting the Gospel Oak to Barking line electrification, according to the line’s user group. The line reopened to passengers on 27 February after an extended blockade for electrification work, but Network Rail failed to complete these works and further closures of the line will be required to finish them. The ‘infrastructure ready’ target for completion of electrification in June this year is now set to be missed.

BGORUG (Barking – Gospel Oak Rail User Group) reports there was a 25% failure rate in mast designs, along with late delivery of overhead line equipment parts from Italy and a 14-week wait for redesigned parts. It is also understood that in late March, 134 masts and 712 sets of fittings, from which wires are suspended, were yet to be installed.

The user group highlights two particularly serious design mistakes surrounding the Pretoria Avenue and Queens Road bridges in Walthamstow. Creating sufficient clearance for overhead wires at these locations was particularly tricky due to the presence of sewers beneath the track, and NR opted to use a slab track solution. However, when masts were installed sewers were then breached at both bridges, causing significant disruption for local residents. 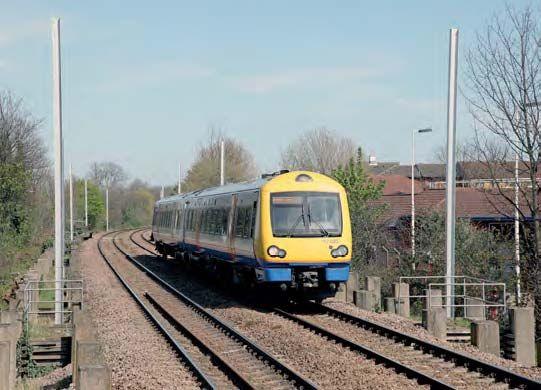 Sewage problem: the GOBLIN electrification. Unit No 172005 passes newly-erected masts approaching Harringay Green Lanes while forming the 14.18 Barking – Gospel Oak service on 20 April 2016. The concrete posts either side are the remnants of platform extensions removed due to subsidence
Antony Guppy

NR is reported to have commissioned an independent audit from Price Waterhouse Coopers, and a final closure plan to carry out the remaining work was expected to be agreed with Transport for London by the end of April. In a written answer to a Parliamentary question, Transport Minister Lord Ahmad confirmed that NR had commissioned an independent audit of the project, with a review due for completion in ‘late spring’. Weekend closures are not expected to resume until a series of blockades on the parallel North London line are completed in June, ensuring that a route remains open for freight traffic from the Thames Estuary ports.