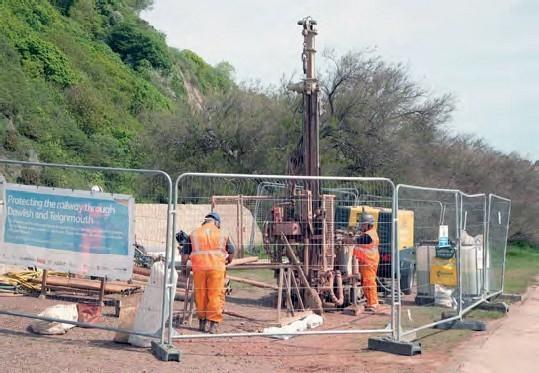 How deep does it go? Teams drill boreholes to establish the structure of the sea wall. Antony Christie 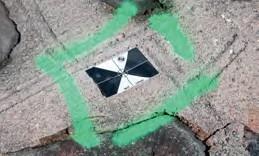 Guidance for drones: these black and white target markers have appeared on the stretch. Antony Christie

NETWORK RAIL is carrying out surveys as part of its optioneering to protect the sea wall along the Dawlish and Teignmouth coast in South Devon. The outcome could see the railway moved away from the base of the cliffs to protect it from subsidence.

Arcadis (Teignmouth area and tunnels) and Arup (Dawlish station to Kennaway Tunnel) have been appointed to assist, while the whole bay area itself is being examined with invasive (boreholes) and non-invasive (sonar and drone mapping) techniques. The work will enable NR to build up the most detailed picture of the railway yet and to establish what can be done to protect the rail line as well as marine life and to keep the amenities for the people of Teignmouth and Dawlish.

As part of the surveying a number of boreholes are being made to find out where the bedrock is and how the sea wall is actually formed, as well as where the bedrock is under the beach. Part of the non-invasive surveying involves the use of drones to map out the sea wall, with the black and white target markers being added to the wall, track and structures down the whole of the wall area. The weight of the water at each tide makes the wall move by up to 14mm, so any drone mapping has to take that movement into account. Antony Christie