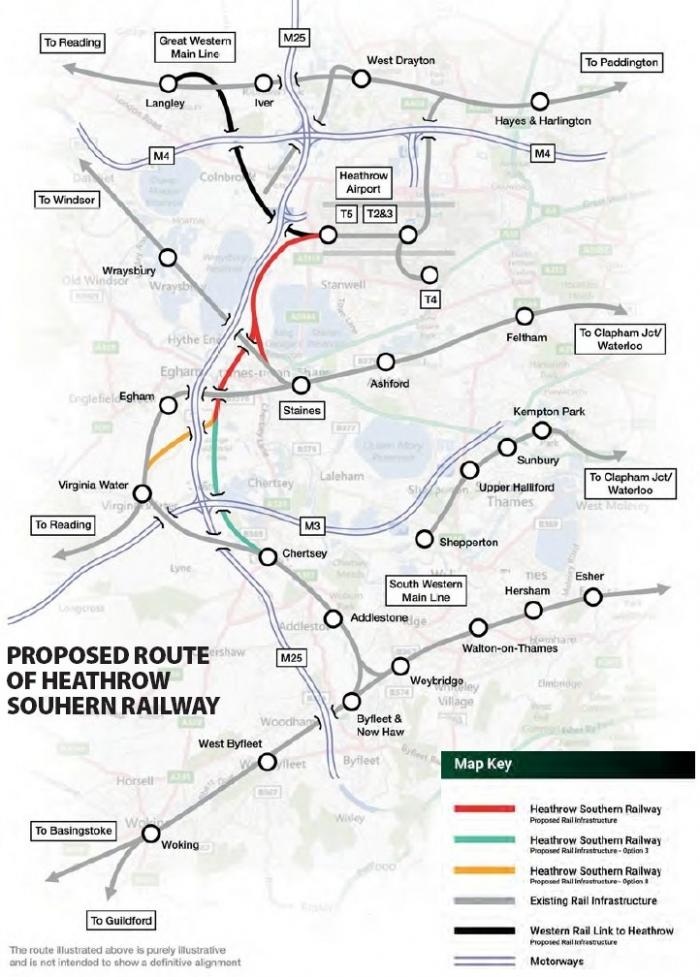 HEATHROW SOUTHERN Railway (HSR) has called for the Department for Transport to move quickly to start a competition to select a preferred developer for southern rail access to Heathrow Airport.

The company is promoting a new privately-owned line connecting the airport to the South Western Railway network at Staines and Chertsey and has responded to the Government’s market sounding exercise regarding a Southern Rail Link to Heathrow (SRLtH). However, HSR Chief Executive Graham Cross has told Modern Railways that time is now running out if, as HSR hopes, a new link is to be built by 2026, when it is likely a third runway could open at the airport and HS2 services are due to start operating from Old Oak Common.

HSR’s plans were first set out in our December 2016 issue (p69). In the intervening period Government has launched a call for market-led proposals to bring private investment into future railway projects, with SRLtH a leading exemplar. A market sounding exercise was launched last summer and a report was published in December, but Mr Cross points out that this was just a questionnaire and the Department for Transport is yet to start a formal competition.

‘We’re still waiting for DfT to set out the next steps, which is a frustrating situation for us’ Mr Cross told Modern Railways. ‘A year ago, the Secretary of State invited investors to prepare, and we’ve done that, but there is still no clarity about what sort of process DfT will run. We’re putting our investors’ money at risk here, but whilst there is some DfT activity underway, we still do not know on what date scheme promoters will be invited to submit proposals.’

DfT’s original aim was to find a scheme which required no Government support, but a written Parliamentary answer from Baroness Sugg on 15 March explained that the Department’s market sounding process ‘did not find a feasible proposal able to progress without Government support’. ‘We aren’t asking for any government money to build our proposed railway and do not expect to need government subsidy to sustain its operation because the new to rail revenues are high enough to cover costs’ explains Mr Cross. ‘But as a prospective infrastructure owner, we do need an undertaking from DfT as the franchising authority that it will specify that train operators should use the new route – and that has been classified as Government support.’

Assessing potential timescales going forward, Mr Cross suggests the design, consent and tendering process for the new railway would likely take around three years, with a further three years for construction. ‘If we’re to open the railway in 2026 that means we’re running out of time and we need things to start moving soon’ says Mr Cross.

HSR’s scheme envisages a new route from the western end of the station at Heathrow Terminal 5 to link up with the South Western network. The company has been refining its proposals over the past couple of years and envisages that its line would be mainly in tunnel to minimise the environmental impact. ‘We would need to tunnel under certain obstacles anyway, and once you’ve set up tunnel boring machines to bore twin tunnels you might as well stay underground’ says Mr Cross.

HSR’s proposal links Heathrow to Network Rail’s Wessex Route near Staines to enable trains to Waterloo; and near Chertsey or Virginia Water to enable trains to Woking, avoiding the level crossings at Egham which caused so many problems for BAA’s abandoned Airtrack scheme. An earlier idea to create a triangular junction with a west-facing connection towards Egham did not command local support and was dropped.

Two core train services lie at the heart of HSR’s proposal. The first would comprise a four trains per hour (tph) service from Waterloo to Heathrow Terminal 5 as an extension of existing SWR services, with 2tph running via Twickenham and 2tph via Hounslow. HSR envisages these services would be formed of SWR’s new Class 701 Bombardier Aventra EMUs.

The ‘701s’ are being built as third rail only units, so HSR is assessing the merits of either retrofitting ‘701s’ with pantographs and transformers to run on AC overhead between Staines and Heathrow, or dual electrifying that section of the route using both the AC overhead and DC third rail systems, with the ‘701s’ running on DC power. Mr Cross notes dual electrification would not be unique, with this concept already applied at Ashford International station, the approaches to London Euston and its platforms 9 and 10 and through the Thameslink core between Farringdon and City Thameslink. He says some discussions have taken place with the Office of Rail and Road about the acceptability of a short extension of the existing DC network, which focused on ensuring that strategies could be put in place to minimise risk to passengers and workforce if third rail were to be adopted. The second service comprises the 4tph Heathrow Express service from Paddington to Heathrow extending via HSR infrastructure to serve Woking, with 2tph continuing to each of Guildford and Basingstoke.

This has the added bonus of linking Basingstoke, Guildford and Woking by direct train to Old Oak Common and Paddington. A recent helpful development for HSR is the change of thinking on rolling stock for the airport shuttle – converted Class 387s are due to be introduced onto the service later this year. Although operating entirely on AC overhead power between Paddington and the airport, these units have been built as dual-voltage, so could easily transition to third rail power at the boundary with Network Rail infrastructure to continue over South Western metals. Clearly the stud of 12 units planned to be dedicated to the airport service would not be sufficient for the extensions HSR plans, but Mr Cross notes c2c’s small fleet of six Porterbrook Class 387s is due to go off-lease when that operator takes delivery of new Class 711 EMUs from Bombardier and could be transferred across the capital to support HSR’s planned services.

Mr Cross notes a further important development supporting this latter proposal is the advancement of plans for a flyover to grade-separate the busy junction at Woking, which it is hoped can be progressed during Control Period 6. ‘We would need the flyover at Woking to get our trains through, as these would be extra services rather than a takeover of current paths’ says Mr Cross. Plans for a local service from the airport to Egham and Weybridge have been dropped due to there being insufficient platform capacity at Heathrow Terminal 5.

Although not part of its proposal, HSR says it can co-exist with the proposed Western Link that would join the Great Western main line near Langley, which it envisages could be served by Elizabeth Line services into Heathrow being extended to Reading given there is insufficient line capacity for services running from Reading to Heathrow over the western link to reverse at Heathrow Terminals 2/3.

A number of competing proposals have emerged for southern access to Heathrow alongside HSR’s plans.

It now appears two have been discounted, including the Windsor Link Railway idea, promoted by Windsor resident and former councillor George Bathurst, of linking the Great Western and South Western routes via a tunnel beneath central Windsor and then creating a link to Heathrow from the current Staines to Windsor branch line (p64, October 2018 issue). Also seemingly out of the running is the HS4Air scheme for a high-speed railway serving Heathrow and Gatwick promoted by engineering consultancy Expedition (p20, September 2018 issue).

This leaves HSR competing with two other known schemes – a proposal from Spelthorne Borough Council for a DLR-style light rail link from Staines to the airport, and Hounslow Borough Council’s proposed rail link from the Windsor lines to the airport, which would also serve a new station at Bedfont, where much new housing is planned. However, Mr Cross says HSR believes the company’s proposal offers the greatest strategic benefits in terms of wider connectivity to the airport. HSR is a private company led by a number of experienced rail managers, including Modern Railways columnist Chris Stokes and ex-GNER boss Christopher Garnett; the lead shareholder and principal investor is Aecom. Mr Cross concludes by noting he hopes the company will significantly expand should it be successful in the SRLtH competition. ‘But we need the competition to get going and for DfT to choose a preferred developer before the patience of investors expires’ he adds.

HSR’S ENVISAGED SERVICES TO HEATHROW IN 2026