THE COST of the tram-train pilot in South Yorkshire has risen by 401% and the benefit-cost ratio has consistently fallen, according to a report from the National Audit Office. When the programme was approved in May 2012 Network Rail agreed to a budget of £15 million, but the project is now expected to cost £75.1 million. The service, which will see vehicles run on main line rail tracks from Rotherham to Meadowhall and then over the Supertram network into the city of Sheffield, was originally due to begin in December 2015 but is now expected to start in summer 2018.

The infrastructure work includes electrification of the heavy rail network between Meadowhall and Rotherham at 750V, the building of new tram-train platforms at Rotherham Central and Parkgate, adaptations to the Supertram network to accommodate the wheel profile of tram-trains, and construction of the Tinsley chord to connect the Supertram and heavy rail networks. Seven Class 399 tram-train vehicles, built by Stadler in Spain, have been delivered to Supertram operator Stagecoach and are expected to enter service on the Supertram network shortly.

The NAO reports a series of cost increases on the scheme. It also highlights that the Permanent Secretary at the Department for Transport recommended in July 2016 that the project be cancelled as ‘many of the lessons of using tram-trains in the UK had already been learned’. This would have released at least £20 million from DfT’s budget, but the majority of the money spent by NR would have been lost, leading to what was described as ‘significant stakeholder and media criticism’. However, Rail Minister Paul Maynard rejected this recommendation because he believed there was ‘a need for the lessons learned from a fully completed pilot to be available for the development of further schemes’. The minister asked NR to meet the funding shortfall, and NR allocated £4.6 million from its renewals budget to address issues with the poor condition of existing assets and reallocated £21.9 million from its enhancements budget to the tram-train project. By this point the benefit-cost ratio of the scheme had fallen to 0.31 in terms of the local public transport case. 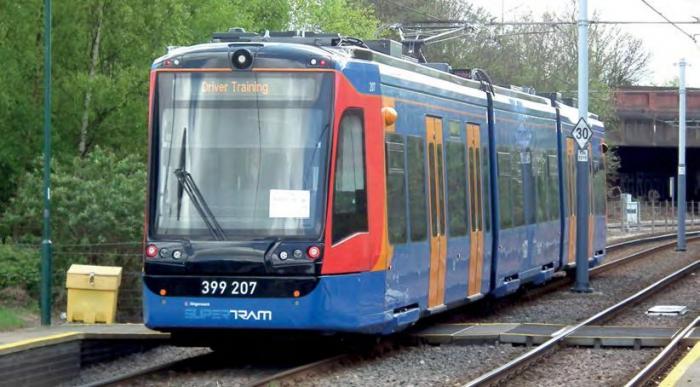 Driver training underway: in the spring, Supertram’s seven Class 399s were being prepared for service over the existing system. Sometime in 2018 four of the seven ‘399s’ will be allocated to the pioneering Sheffield Cathedral to Rotherham Parkgate tram-train service. On 18 April 2017 unit No 399207 is seen on driver training duty departing the Tinsley-Meadowhall South stop on an inbound run.
Mike Haddon

NAO reports the cost increase occurred because the works were ‘more complex than … anticipated at the design stage’, including ‘dealing with the condition of assets’ and that ‘the technical innovations required more time than originally expected’. Other factors included additional power supply works, changes to the project specification and that the characteristics of tram-train vehicles differed from agreed design assumptions. The initial specification was also found to underestimate the project’s complexity, there was a lack of the necessary expertise in the project team and design integration was not managed well.

The NAO confirms Stagecoach, which holds the Supertram operating concession, has claimed £2.5 million from DfT for prolongation costs and loss of revenue due to delays starting the tram-train service.

NR has liaised with promoters to share lessons learned, and has been providing advice to authorities in Glasgow, West Yorkshire, Wales and Manchester. The company has also committed to preparing an ‘Industry Learning Report’ by 2021. NAO says it is too early to determine whether the project will realise ‘the wider strategic benefits’.