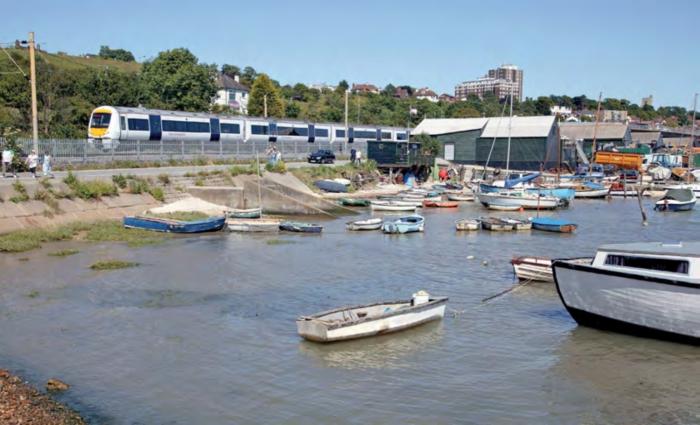 Liguria meets Leigh: at high tide on the Thames, unit No 357038 departs from Leigh-on-Sea forming the 14.30 Fenchurch Street to Shoeburyness service on 3 June 2011. Antony Guppy

NATIONAL EXPRESS is to sell the c2c franchise to Italian state operator Trenitalia in a £70 million deal.

The company says it has reached agreement in principle and said on 11 January that it expected the acquisition to be completed ‘in the next three to four weeks’, subject to final consent from the Department for Transport. National Express says it is likely to make ‘a small net profit’ from the acquisition.

National Express says that ‘following initial partnership discussions regarding future franchise bidding, Trenitalia UK made an offer that National Express’ board believes represents the best, and a fair, deal for its shareholders’. It adds that while it does not rule out participating in future UK rail contracts, the company has seen significant growth in North America and continental Europe in recent years and believes there are further opportunities for growth in these markets.

Trenitalia was awarded a pre-qualification questionnaire passport by the Department for Transport in December 2015, making it eligible to express interest in UK franchises. The companies say the c2c operation is ‘an excellent fit with Trenitalia’s customer-centric approach’. The acquisition is seen as Trenitalia’s first step in its plans to expand in the UK rail passenger market, and the company is said to be ‘pursuing a number of franchise opportunities including beyond today’s deal’. It says the decision to invest in the UK is based on ‘the market’s fundamental strength and potential for growth, particularly in light of the Secretary of State for Transport’s recently announced vision for reform’.

Following the acquisition the existing c2c management and staff will be retained, and Trenitalia has committed to invest for further improvements ‘based on innovative technologies’.