THE GOVERNMENT’S decision to cancel electrification of the Midland main line north of Kettering and of the Windermere branch was taken in March 2017 but not announced until four months later, according to a National Audit Office (NAO) report.

Transport Secretary Chris Grayling announced in July 2017 that these two electrification projects would be shelved alongside electrification from Cardiff to Swansea. For the latter project the Prime Minister had called for an updated business case prior to agreeing its cancellation. Mr Grayling said at the time bi-mode trains would be used on these routes instead of pure electric trains, helping deliver passenger benefits sooner than would have been the case with full electrification.

However, the NAO report also reveals that at the time of the decision to cancel in March 2017 there was no suitable bi-mode train available in the market that could have delivered the stated benefits on the Midland main line. Mr Grayling has said bi-mode trains will be delivered for the MML from 2022 and expects journey times between London and Sheffield to be only one minute slower than with fully electric trains.

At the time, officials had advised that bi-mode rolling stock with the required speed and acceleration for the route did not exist, but the Department for Transport said it expected manufacturers would develop a bi-mode train with the required characteristics.

The NAO explains that the decision to cancel the projects was taken due to affordability issues with Network Rail’s investment portfolio. NR Chairman Sir Peter Hendy’s review of the enhancements programme originally proposed deferring schemes, including MML wiring, to Control Period 6 (2019-24), and proposed raising £1.8 billion through asset sales to cover cost increases. However, the NAO reports that in late 2016 the Department for Transport and NR found raising this amount would be unachievable.

Concerns around funding and the possible need to cancel projects were revealed in late 2016. At this point NR anticipated it would need to cancel ‘a substantial number of projects’. NR identified a long list of 23 projects that could feasibly be cancelled or deferred. These were grouped into four categories, of which six Category 0 options were first choice for cancellation, four of which were subsequently cancelled, including electrification of the MML north of Kettering, Cardiff to Swansea and the Windermere branch. In early 2017 DfT agreed to identify £400 million of savings from NR’s current rail investment period budget through deferring or cancelling projects. However, continued refinement of calculations revealed the expected savings from the full package of cancellations was £337 million, lower than the £562 million saving previously identified.

In terms of the Cardiff to Swansea route, DfT’s April 2017 appraisal assumed journey times between Cardiff and Swansea would be 3.5 minutes longer with bi-mode trains operating in diesel rather than electric mode. However, Hitachi has agreed to modify all Great Western Railway’s Class 800 units to enable them to operate at faster speeds in diesel mode, and DfT now expects the trains to achieve the same journey times in diesel mode between Cardiff and Swansea as they would have in electric mode. An earlier decision had seen all GWR’s new inter-city trains being delivered as bi-mode units with diesel capability, rather than a mix of bi-mode and electric-only units, meaning they can continue to operate over the non-electrified section to Swansea.

For the Windermere branch, NAO says at the time DfT awarded the Northern franchise it recognised Network Rail would not deliver electrification in time to meet the original franchise commitments. To maintain direct services from Manchester to Windermere, Northern is introducing bi-mode Class 769 units (converted from Class 319 EMUs). However, NAO says these will not provide the passenger benefits promised in the franchise or those announced at the time of the cancellation of electrification in July 2017.

In January 2018, DfT advised that Northern should be permitted to buy new or cascaded diesel trains for the route in order to meet standards set out in the franchise around quality of rolling stock, while Mr Grayling has also asked Northern to explore the possibility of using alternative fuel trains on the route.

The NAO says DfT has not yet fully costed the environmental and future financial implications of its decision to cancel the MML and Windermere electrification schemes. 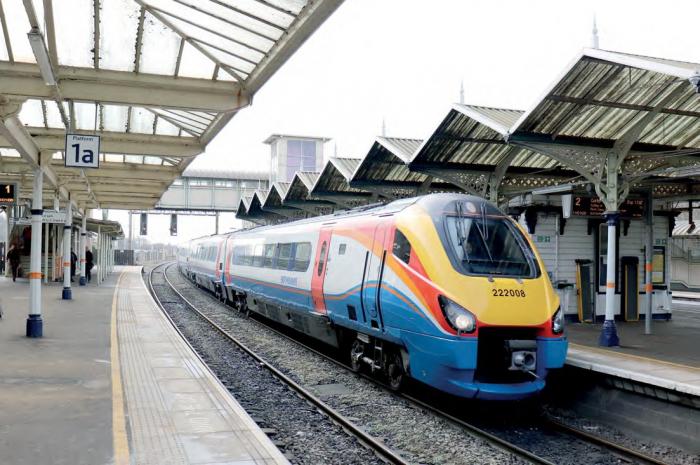 MML bi-mode controversy: unit No 222008 arrives at Kettering with a service for Corby on 9 March 2018.
Philip Sherratt