Still think High Speed 2 can open in 2026? Whether it’s contractual complications, political uncertainty or just the sheer scale of the work that lies ahead, one needs vast reserves of optimism to believe that the scheduled Phase One opening can still be achieved.

HS2 Ltd began its search in November 2018 for a contractor to build the new seven-platform Birmingham Curzon Street station. Nine months later and a notice in the Official Journal of the European Union stated simply: ‘Phase One stations: Birmingham Curzon Street design and build contract. HS2 Ltd hereby terminates the whole of this procurement process and will not proceed with the invitation to tender stage’.

A new OJEU notice effectively relaunched the procurement exercise with a promise to re-engage with the market and launch a revised strategy. The notice added: ‘HS2 have recognised the current market conditions are challenging and the increasing concern regarding risk transfer and wanted to revise our position to provide a better balance and overall outcome’.

Birmingham Curzon Street is not the only HS2 station procurement facing difficulties.At Old Oak Common, Bechtel’s challenge to HS2 Ltd’s decision to award the main station works contract to a joint bid by Balfour Beatty, Systra and Vinci is also understood to be delaying progress.

Following Bechtel’s appeal in February a court order has effectively put the BBSV contract on hold. HS2 Ltd’s bid to force a hearing in July (when it submitted its application for the suspension to be lifted) was rejected by a judge. Instead, a hearing to determine whether or not HS2 Ltd’s Old Oak Common contract award will stand is scheduled for 3 September. With so much uncertainty it is hardly surprising that, six months after contract award, the main Old Oak Common construction team is biding its time.

More of a threat, however, to that 2026 delivery commitment is the political tectonics underpinned by Brexit which make High Speed 2 vulnerable to soundbites and newspaper headlines. Inside HS2 Ltd, chair Allan Cook is conducting a review of the project to ensure the current scope, cost and schedule can survive ministerial scrutiny. While this process has being going on, Phase One managing director Jim Crawford has left his role after nearly five years in position.

Ministers, meanwhile, are due to decide whether to issue the formal ‘notice to proceed’ for HS2 in December, a key review point that would unlock funding for major station, tunnel and viaduct construction work. The decision to delay the notice to proceed date not only reduces the amount of time available before 2026 to build the railway but also positions this key decision after a comprehensive spending review by government.

But more significant than these dates on the schedule is the question of who those ministers who will take the decisions will be. New players in government – including probably a new Transport Secretary and Chancellor – mean normal service is not necessarily guaranteed. The stance of the new Prime Minister on HS2 will of course be crucial for the future of the project.

During the Conservative leadership race Jeremy Hunt was unequivocal in his support for High Speed 2. When asked during an ITV debate if the project should be axed he said no, adding ‘we should back it to the hilt’.

Boris Johnson, his rival and front-runner to be PM, also backed the project, although he appeared to favour prioritising Northern Powerhouse Rail. Answering the HS2 question he said: ‘I don’t think it should be abandoned, I think it’s extremely expensive and I think the business case is dubious; I think we should examine it and do a review’

Given Mr Johnson’s repeated commitment during his campaign to invest in infrastructure, abandoning HS2 seems unlikely. Once in power and fully briefed, the new PM will surely realise how many commitments to jobs and investment hinge on delivering HS2 between London and Birmingham. Whether it is Northern Powerhouse Rail using HS2 alignments (p9, last month), the Midlands Hub or the University of Leeds’ Institute for High Speed Rail and System Integration, scrap HS2 and the entire edifice comes tumbling down. 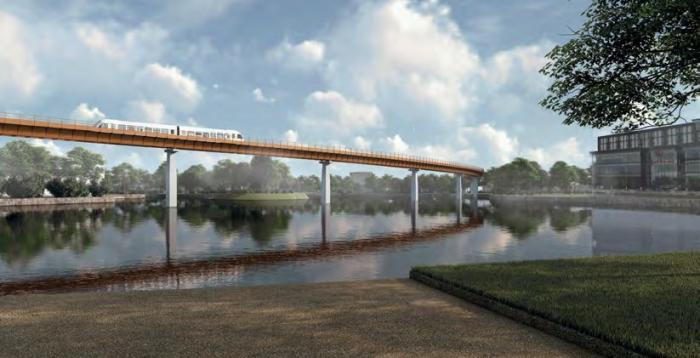 People Mover plan: HS2 has unveiled visuals for a 2.3km-long people mover connecting Interchange station in Solihull with Birmingham Airport. The entire route would be on viaduct up to 12 metres off the ground, with vehicles taking six minutes for the journey with stops at Birmingham International station and the NEC. Services would run every three minutes, with a total capacity of 2,100 passengers per hour in each direction. The 20-metre-long vehicles would be maintained in a dedicated facility located along the viaduct on the eastern side of the M42 crossing.

Much then to be discovered and decided in the run up to Christmas. For the time being we must be content with taking stock of what is happening and how that helps bring us closer to 2026 which, for now at least, is the scheduled Phase One opening date.

There is plenty happening. Near Euston the demolition programme continues and for those familiar with the area around Hampstead Road the scenery is altering rapidly. The 5,000 square foot former BHS Warehouse has gone and across the road demolition of the Regents Park Estate is underway. Work started with the Ainsdale block in June followed by Old Tenant’s Hall and then Eskdale, starting in August. The taller buildings, Eskdale and Silverdale, will be demolished using a long reach muncher – a crane will hang a protective screen on the other side of the structure to prevent debris from escaping.

These buildings are being razed to allow Granby Terrace Bridge, which crosses the rail lines to and from Euston, to be extended towards Park Village East so it can also cross the new high-speed rail lines. From August to October part of the existing bridge deck will be demolished, with the removal of the road surface and parapet walls.

But for all the drama of demolition this is not enough to bring HS2 to its stated endpoint. There may, as HS2 Ltd tells us, be 9,000 people now working on activities relating to the new railway, but the big stuff – building the stations, tunnels and viaducts – has yet to begin. Crossrail has reminded us that in the UK building and commissioning infrastructure takes time and right now a 2026 opening simply is not credible.

Circumstances have conspired to create a phoney summer for HS2. Activity abounds but main works have yet to start – or indeed secure the necessary sign-off from the top. We know 2026 is unrealistic and carefully chosen words from Allan Cook at July’s High Speed Rail Industry Leaders conference indicate that HS2 Ltd knows it too. As the new government settles into office it will be time for a frank update concerning when HS2 Phase One will be ready.