TRANSPORT SECRETARY Chris Grayling has granted planning approval for a 660-metre extension of the Blackpool Tramway from North Pier to Blackpool North railway station. Following the recent upgrade of the Blackpool to Fleetwood route, Blackpool Council applied for a Transport and Works Act Order for the establishment a link to the town’s North station.

The £22 million extension will leave the existing route via a two-way double track junction at North Pier and cross the Promenade highway to Talbot Square, where a new eastbound tram stop will be located. A double track alignment will then continue eastwards along the centre of the Talbot Road highway to a new intersection with Topping Street, after which a shared section will lead to the terminus at a new transport interchange on a site formerly occupied by a Wilkinson’s store. This is 60 metres from Blackpool North’s station building, at the same level as the existing underpass to the station.

It is proposed trams will run every 10 minutes at peak times and will alternate between northbound services towards Bispham and southbound services towards Pleasure Beach, providing additional capacity on the busy seafront area of the tram network. The cost of the extension includes the acquisition of two additional Flexity2 trams from Bombardier to support the increased service. Construction of the extension is expected to take up to 16 months, with the aim of services beginning in 2019. 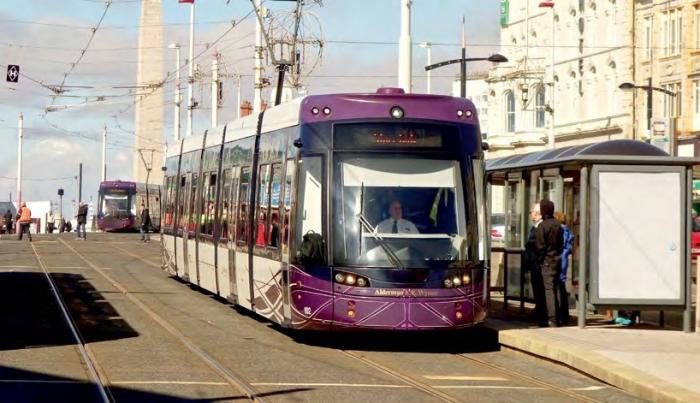 Two more Flexity2s: one of the new trams at Talbot Square on 30 March 2016. John Whitehouse