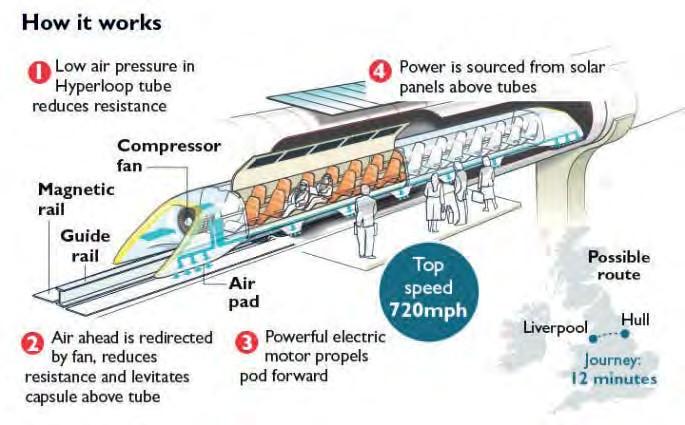 HYPERLOOP, THE high-speed travel project promoted by US futurist Elon Musk, has taken on eight staff in the UK to bring the technology to Europe. The first full trial of the system, which uses magnets to carry pods through a low-pressure tube at speeds of around 700mph, was due to take place in the Nevada desert by the end of June.

The company has earmarked nine potential routes in Europe: top of the list is a bizarre Corsica to Sardinia link (what does Hyperloop know about that huge untapped market that has eluded the rest of the transport industry?).

Three of the potential routes are in the UK. Nick Earle, Hyperloop’s British senior vice-president, has been quoted as saying that the company is pushing for the opportunity to undertake a detailed feasibility study into building the first UK line as an east-to-west link across the north of England, connecting Liverpool, Manchester, Leeds and Hull in 12 minutes. Scotland to Wales and north-south links are also proposed.