PRIME MINISTER Boris Johnson has given his backing to High Speed 2 and committed to delivering both phases of the high-speed rail programme linking London to Birmingham, Leeds and Manchester.

Speaking in Parliament on 11 February, Mr Johnson told MPs concerns over costs had not detracted from the fundamental value of HS2 and he pledged to ‘get HS2 done’. His comments were made as the Government published Douglas Oakervee’s review of HS2, which recommended the Government recommit to the full Y-shaped network.

Temporary terminus? Visual of Old Oak Common station post-HS2. The Oakervee review recommends this becomes the temporary terminus for the high-speed line pending completion of the redevelopment at Euston.

The thrust of the 130-page Oakervee report is that building either Phase One or Phase Two of HS2 without the other makes little sense, building HS2 from north to south is impractical, and changing Phase One significantly would introduce years of delay because it would involve unpicking existing legislation. Mr Oakervee also pointed out that cancelling the project would cost at least £8.5 billion, including money already spent on HS2, and would inflict significant damage on the construction industry and the Government’s reputation.

As newly elected Prime Minister, Mr Johnson asked Douglas Oakervee in August 2019 to lead a panel that would review ‘whether and how we proceed’ with HS2. Mr Oakervee was no stranger to the project, having served as chairman of HS2 Ltd from 2012 until the end of 2013 and overseen the introduction of the hybrid bill for Phase One of HS2 into Parliament.

His review, which the Government originally said would report during autumn 2019, was to consider the benefits and impacts of HS2 and its affordability following claims that the cost of the scheme had risen substantially.

Mr Johnson’s decision to commission the review has resulted in a period of uncertainty for HS2 by providing an opportunity for arguments for and against the scheme to be reopened and ending a long run of unconditional support for the scheme from different administrations. Six months on and HS2 once again appears to have backing from Number 10 and this should allow main construction works to get underway during 2020, with those on Phase One planned to begin in April.

In his announcement Mr Johnson said: ‘If we start now, services could be running by the end of the decade, so today the Cabinet has given high-speed rail the green signal. We are going to get this done, and to ensure that we do so without further blow-outs on either cost or schedule, we are today taking decisive action to restore discipline to the programme.’

He later added: ‘The review recently conducted by Douglas Oakervee... leaves no doubt of the clinching case for high-speed rail: a vast increase in capacity, with hundreds of thousands of extra seats, making it much easier for travellers to move up and down our long, narrow country’.

Mr Johnson told MPs the Government’s Infrastructure and Projects Authority considers the first phase of HS2 can be delivered for its current projected cost of between £35 to £45 billion in today’s prices. The opening of the Phase One route from London to Birmingham, and Phase 2a, from Birmingham to Crewe, is now anticipated between 2028 and 2031.

Mr Oakervee’s report reiterates support for most parts of the HS2 Y-shaped network but advises the Government to scrap the Handsacre connection to the West Coast main line, which would allow HS2 trains to continue to Stoke-on-Trent, Stafford and Macclesfield. He says this is not required now Phase 2a to Crewe is being progressed alongside Phase One and argues it would be more cost effective to increase train frequencies running solely on the West Coast main line to these destinations. Mr Oakervee also calls for passive provision to be made for a station at Calvert in Buckinghamshire, where HS2 will cross the planned East West Rail route.

In his foreword to the report Mr Oakervee said all members of the review panel, with the exception of Deputy Chair Tony Berkeley, supported the approach taken in the report. Lord Berkeley has previously criticised the review process and published his own ‘dissenting report’ (p94, last month). 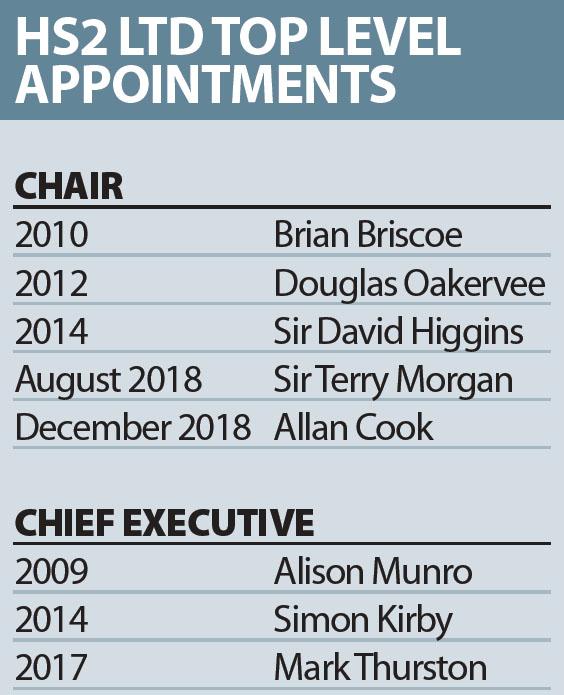 Setting out the way forward for High Speed 2, the Prime Minister was critical of Government-owned delivery agency HS2 Ltd on which he pinned the blame for programme delays, cost rises and other issues, comments which appeared designed to deflect blame from ministers.

Speaking in Parliament, Boris Johnson said: ‘When it comes to advocating HS2 it must be said that the task is not made easier by HS2 Ltd, the company concerned. Speaking as a member of parliament whose constituency is on the route, I cannot say that HS2 Ltd has distinguished itself in the handling of local communities. As everybody knows, the cost forecasts have exploded, but poor management to date has not detracted from the fundamental value of the project.’

Mr Johnson qualified his remarks by noting recent improvements to HS2 Ltd’s performance under current chairman Allan Cook, appointed in late 2018. Prior to this Sir Terry Morgan had a short stint as chair, which ended after problems emerged at Crossrail Ltd for which Sir Terry was also chairman. Before this Sir David Higgins chaired the organisation after joining HS2 Ltd from Network Rail. His NR colleague Simon Kirby later became HS2 Ltd Chief Executive and was succeeded by current boss Mark Thurston in 2017. 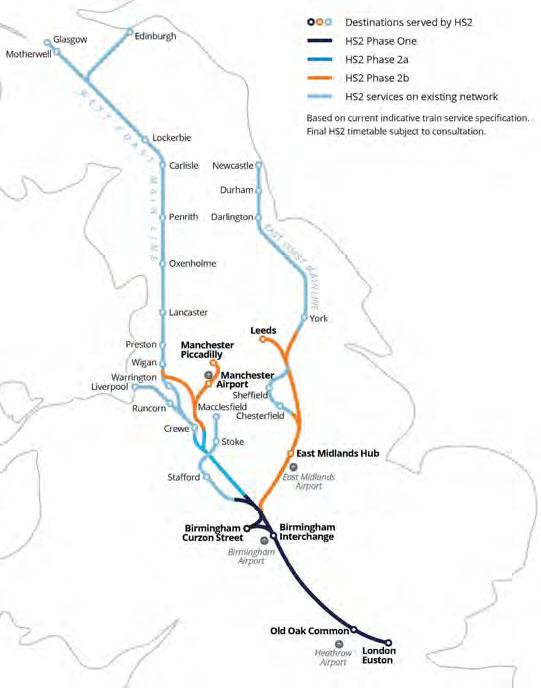 The scheme as it stands: Phases One and 2a are likely to proceed substantially as set out here, but the route of Phase 2b is to be reviewed as part of High Speed North plans.

One significant output from Douglas Oakervee’s review of the project is the Prime Minister’s decision to accept the former HS2 Ltd chair’s recommendations that responsibilities for delivering parts of High Speed 2 should be taken away from his old employer and given to other organisations.

For HS2 Phase One this will see what the PM described as a ‘special delivery vehicle’ given responsibility for co-ordinating and realising the complex work required at Euston. Until now this has consisted of separate schemes to build a High Speed 2 station, upgrade the existing station and deliver an oversite development that will provide new public realm and improved links for communities across the railway. With a development area of 10 million square feet, Euston has been described as the largest oversite development in Europe.

In his report Mr Oakervee describes current plans for Euston as ‘unsatisfactory’. Despite aspirations to redevelop Euston that go back many years a comprehensive scheme for the whole site has yet to be agreed despite the involvement of Government, HS2 Ltd, Network Rail, Camden Council and Lendlease, which was appointed master development partner for Euston in February 2018. No government has yet offered funding for the full site redevelopment, which has led HS2 Ltd to focus on building a two-stage high-speed annexe to the existing station. However Government chooses to structure the Euston special purpose vehicle, some form of funding guarantee will be needed to take this forward.

In addition to site-wide plans, Douglas Oakervee has questioned the scope of works planned for High Speed 2 at Euston and has suggested costs could be cut by reducing the core train specification from 18 to 14 trains per hour. Deviating from HS2 legislation would likely delay Phase One but cutting the number of trains might allow more challenging workstreams, such as a tunnelled dive-under, to be omitted. Mr Oakervee recommends a study to consider options to simplify the HS2 approach to Euston.

As part of the affordability review of HS2 Mr Oakervee was asked to consider whether it is necessary for HS2 to run to Euston or if terminating at Old Oak Common might be a more cost-effective solution. While he has concluded that Euston remains an essential part of the HS2 proposition, his recommendations for further work at Euston mean that when HS2 services start running they will initially operate to and from Old Oak Common.

Although HS2 Ltd has appointed a joint venture of Dragados and Mace as main contractor for Euston station, the terms of this arrangement may face revision to accommodate emerging plans for the full Euston site and possible HS2 scope changes at and on the approaches to Euston. Under current HS2 plans, Euston will get 11 new 400-metre-long platforms, a new concourse and improved connections to Euston and Euston Square Underground stations. But according to the Oakervee report: ‘HS2 Ltd and the DfT, together with Lendlease and Network Rail, have been exploring options for amending the design of Euston station to potentially reduce the size and number of platforms and encourage a single build.’

In addition to this rethink Mr Oakervee calls for more to be done to maximise commercial opportunities that could help finance Phase One stations, although he notes there are ‘very limited UK examples of this approach being used’.

With such a significant level of uncertainty now surrounding the scope, delivery and financing of the southern High Speed 2 terminus, it seems unlikely HS2 trains will operate to or from Euston before 2030.

Not only will HS2 Ltd step back at Euston but there will also be a change to the way HS2 Phase 2b is delivered. HS2 Ltd is expected to hand over delivery of this part of the project to another agency which could take charge of all major rail investment programmes in the north of England, including Northern Powerhouse Rail. The Government says it will draw up an integrated plan for rail in the north – which will include identifying the most effective sequencing of all relevant investments in the north – informed by an assessment from the National Infrastructure Commission. Comments from the Prime Minister and Transport Secretary Grant Shapps on 11 February indicate Phase 2b will be rebranded as a standalone scheme – High Speed North.

These changes mean that despite the Prime Minister committing to HS2 Phase Two, the plans for this part of the route are now poised for their biggest shake-up since the Y-shaped network was announced more than a decade ago. Douglas Oakervee has recommended a review of Phase Two should be completed by this summer before a bill to build routes to Leeds and Manchester is laid before Parliament. Such a timescale suggests only cursory changes, but with legislation for Phase Two yet to be nailed down Mr Oakervee says opportunities exist to rein in costs and moots the idea of upgrading sections of existing railway rather than relying entirely on new alignments.

Taken together, the prospect of re-examining HS2 Phase Two alignments and integrating the scheme with a wider north of England rail investment programme suggest significant work and time will be needed before this part of Britain’s high-speed rail programme can go ahead.

Mayor of Greater Manchester Andy Burnham welcomed the Prime Minister’s announcement but said there were a number of issues on which he was seeking further clarification. ‘The Prime Minister gave a firm timetable for HS2 from London to Birmingham, however there was no such commitment for the north. We want to see the construction of Northern Powerhouse Rail fast-tracked, in line with the commitment the Prime Minister made in Manchester shortly after entering office.’

Mr Burnham said the decision to bring development of HS2 Phase 2b and Northern Powerhouse Rail together provided an opportunity to redesign Manchester Piccadilly station to ensure it can accommodate future east-west rail connections as well as HS2.