BOXES OFF THE RAILS

ON 28 JANUARY 2020, a container train derailed on a set of points just south of Eastleigh station following a crew change. According to the Rail Accident Investigation Branch, the locomotive became partly derailed and then re-railed itself, and some of the wheels on four of the following five wagons also became derailed, causing significant damage to 160 metres of track, two sets of points and sleepers. 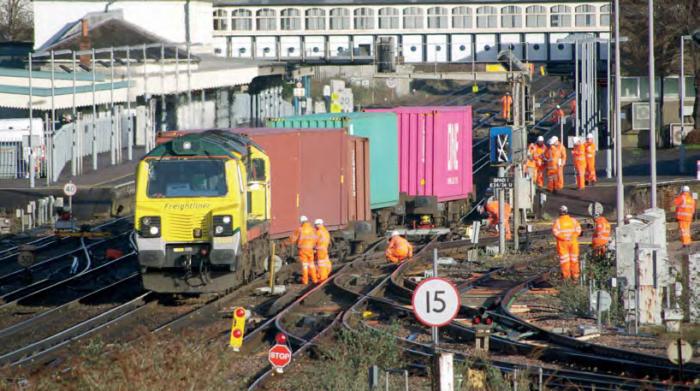 Consternation all round: staff survey the damage at Eastleigh on 29 January, prior to recovery of the derailed train.
Colin Scott-Morton

The railway reopened on 3 February after Network Rail removed the wagons and installed 160 metres of temporary track. However, several sets of points were damaged, requiring a new set to be built to a bespoke design, and until these are installed operations are hampered.

The cause of the incident was a small number of fastenings giving way, leading to the rails spreading apart and the train’s wheels dropping into the space between them. Network Rail reports the type of fastening involved is used in a limited number of locations, and it has conducted enhanced precautionary inspections of all similar fastenings across the Wessex route, with no additional areas of concern identified through this work. A separate RAIB investigation is also taking place. 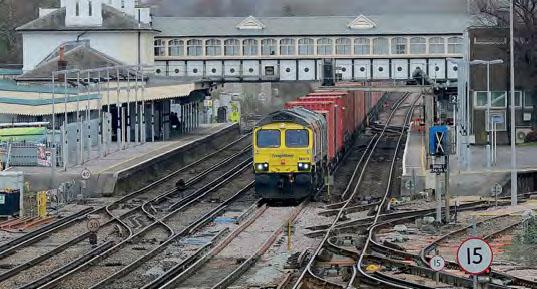 Plain-lined: the down fast line at Eastleigh on 3 February 2019 with the temporary trackwork fix, with Nos 66419 and 66592 passing with a container service.
Ian Francis

The Eastleigh derailment followed another incident on 23 January on the Gospel Oak to Barking line between Leyton Midland Road and Walthamstow Queens Road, where a freight wagon derailed and caused extensive damage over a 2.5-mile stretch of railway. The line was closed between Barking and South Tottenham while repairs took place; the line was due to reopen on 19 February, shortly after we went to press.