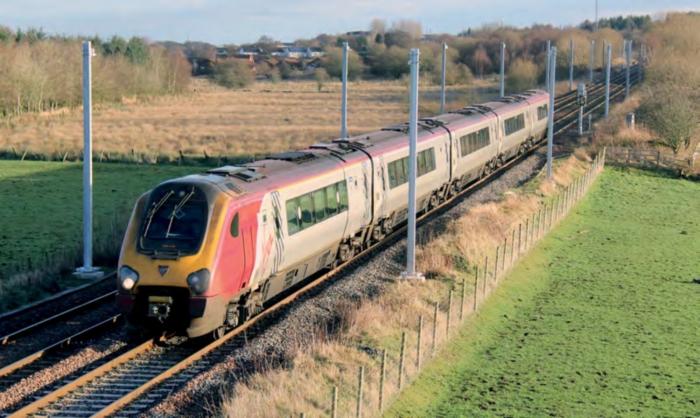 Scottish electrification progress: the green light has been given for wiring of the Shotts route, while infrastructure teams are pushing on with those routes authorised earlier. This is the down grade stretch from Greenhill Lower Junction towards Cumbernauld at Allandale, where masts which are part of the Edinburgh Glasgow Improvement Programme (EGIP) are now evident; a diverted Edinburgh Waverley to Carlisle Virgin Trains service passes on 1 January 2017. Ian Lothian

CARILLION POWERLINES has been awarded a contract by Network Rail to electrify the Shotts line in the Scottish central belt.

The £49 million contract will deliver 74 single track kilometres of electrified railway between Holytown Junction and Midcalder Junction, creating what will become the fourth electrified route between Edinburgh and Glasgow. The work is due to be completed by March 2019.

The contract covers physical delivery of electrification infrastructure, including around 1,458 piled foundations to host 1,265 masts. A separate programme will see 17 structures on the route removed or replaced, with an increase in parapet heights at a further 10 bridges. New station footbridges at Addiewell and West Calder, platform extensions at Carfin, Shotts and West Calder stations and the complete redevelopment of Livingston South station will also feature. Demolition of the bridge over the railway at Shotts began in early January ahead of its reconstruction by contractor BAM Nuttall.

Following the completion of electrification, ScotRail will deploy its new Hitachi Class 385 EMUs to services on the route.