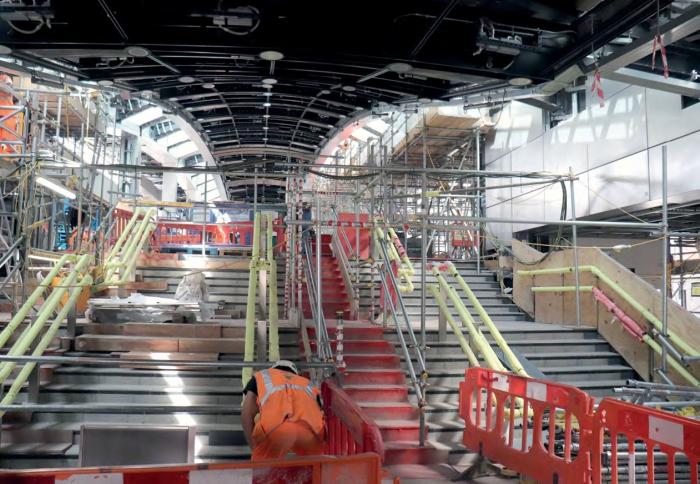 Uphill struggle: contractors work on getting Whitechapel station back on track on 29 August 2019. These are the stairs to the main concourse.
Philip Sherratt

CROSSRAIL WILL need to negotiate a revised funding package following confirmation that the extra money it was allocated a year ago will be insufficient to complete the new railway. In a statement to the London Stock Exchange on 8 November, Crossrail Ltd’s parent company Transport for London said latest projections show a central cost forecast (including risk contingency) of approximately £15.363 billion.

Taken together with the money provided to Network Rail to deliver the overground sections of what will become the Elizabeth Line, the Stock Exchange statement indicates that the total cost of delivering Crossrail infrastructure is now expected to be between £18.2 billion and £18.45 billion.

This is the third increase in the cost of Crossrail in a year. The financing package agreed by the Department for Transport, the Greater London Authority and TfL in December 2018 saw the funding envelope for the central section of Crossrail, managed by Crossrail Ltd, increase from £12.8 billion to just under £15 billion, bringing the total financing package to £17.6 billion.

In July this year former Transport Secretary Chris Grayling revealed that Network Rail costs had increased by £200 million, taking the Crossrail budget up to £17.8 billion. The latest announcement sees the projected cost of infrastructure for the cross-London railway break the £18 billion mark.

Although costs have risen, a deal has yet to be agreed to provide the extra money – meaning the Elizabeth Line currently has a funding shortfall. TfL and the DfT are said to be in discussion regarding how funding of these additional costs will be resolved.

As reported in September, current spending rates at Crossrail have indicated that the increased funding agreed in December would not be enough to finish the Elizabeth Line.

At a meeting of TfL’s Programmes and Investment Committee on 23 October, the panel was informed that current cost forecasts were that the central section would cost between £42 million and £392 million more than the December 2018 funding package. A five-page public report from Crossrail Chief Operating Officer Howard Smith was presented along with a 235-page report for discussion in private. The stock exchange statement (with cost estimates now between £400 million and £650 million more than agreed) was made less than three weeks later.

The public report to the meeting showed not only that Crossrail is poised to exceed the funding agreed a year ago but that the latest opening schedule, announced in April this year by Chief Executive Mark Wild, is also under threat. The Elizabeth Line had been due to open in December 2018 but under Mr Wild’s revised delivery plan services were expected to start between October 2020 and March 2021.

TfL’s Stock Exchange statement rules out a 2020 opening. It says the Elizabeth Line will open ‘as soon as practically possible in 2021’. A more comprehensive update is promised early in 2020 but the chances of an early 2021 opening now appear remote.

Crossrail Chief Executive Mark Wild said Custom House, Farringdon (p58) and Tottenham Court Road Elizabeth Line stations will be complete by the end of 2019, with the fit-out of tunnels set to finish in January 2020.

He said the central section will be substantially complete by the end of the first quarter in 2020, except for Bond Street and Whitechapel stations (p92, October issue), where work will continue.

He added: ‘The two critical paths for the project remain software development for the signalling and train systems, and the complex assurance and handover process for the railway; both involve safety certification for the Elizabeth Line. These must be done to the highest quality standards to ensure reliability of the railway from day one of passenger service.

‘Crossrail Ltd will need further time to complete software development for the signalling and train systems and the safety approvals process for the railway. The trial running phase will begin at the earliest opportunity in 2020; this will be followed by testing of the operational railway to ensure it is safe and reliable.’

Among the challenges of getting Crossrail finished, fire systems have emerged as a problem issue. Following the handover of the Victoria Dock and Pudding Mill Lane portal sites to TfL, infrastructure manager for the Elizabeth Line, TfL noted that the Mile End shaft handover was delayed partly because of a fire alarm control panel which needed to be upgraded to meet the standards required for the railway. It has identified 31 instances of these sub-standard fire panels installed across the rest of the Crossrail stations, shafts and portals.

Earlier this year TfL said a safety critical fire system at Canary Wharf, fitted out by Canary Wharf contractors for Canary Wharf Group and completed well ahead of the other new Elizabeth Line stations, did not meet legal standards. Drawing attention to sub-standard fitout at the Canary Wharf site, TfL then said it would need to spend more than £75 million at the station to bring safety critical systems, including those relating to fires, up to legal standards. But now it appears there is a programme-wide issue with fire systems rather than one linked to CWG’s project management.

In an effort to speed up the handover of Elizabeth Line sites, and in turn to allow trial running of trains to begin, ‘handover execution plans’ are currently being developed by Crossrail Ltd for each station, shaft, portal and railway system. Five of the first elements to be handed over have been identified as ‘nursery’ elements from which key lessons for handing over the later, more complicated stations, shafts and portals will be learned.

One of these nursery elements, the Custom House station site, was due to be handed over to the infrastructure manager in November. However, this is one of the 31 sites where a fire panel replacement was required. TfL says that as one of the nursery sites Crossrail Ltd is making Custom House a priority and that a new panel has been installed. Dan Harvey

Crossrail will have its revenge. Nearly 10 years ago Modern Railways was recounting in painstaking detail the will-it, won’t-it moments when the future of Crossrail was uncertain. Time and effort were lavished on fine tuning the Crossrail budget and resequencing parts of the programme in a bid to deliver maximum bang for buck and portray ministers and Treasury wonks as masters of financial discipline. After successive Crossrail cost increases, that’s out of the window. When it emerged that, contrary to the information we were fed, Crossrail was in no way on time or budget, there was understandable outrage. Increasingly that is replaced by a sense of resignation. London First’s Chief Executive Jasmine Whitbread described the latest setback for Crossrail as ‘very disappointing to businesses across the capital’.

It is remarkable now to look back and consider the time that was devoted to setting the Crossrail budget. We know now that, not only did we not know in 2010 how much Crossrail would cost, but that in 2019 we still don’t know how much it will cost. Put simply, it will cost what it will cost. Crossrail has reached a sweet spot – you can’t cancel, descope or mothball this project now. Cost what may, it has to be finished. DH