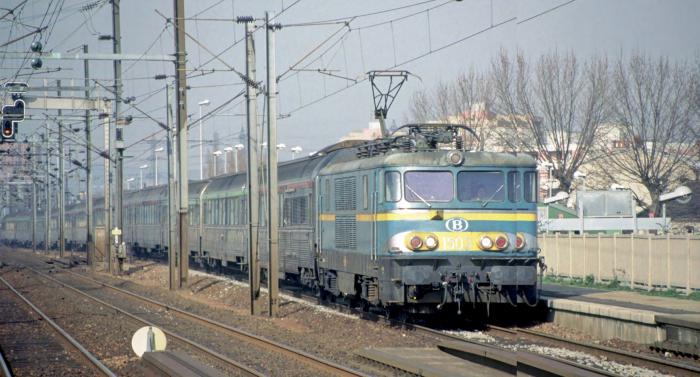 Back to the Future? TEE1.0, 30 years ago: Belgian (SNCB) multi-system electric No 1503 and former TEE ‘Étoile du Nord’ SNCF ‘Inox’ stock passing St Denis nearing Paris Gare du Nord on 24 February 1990 with the 08.53 from Amsterdam CS, running as EuroCity 82. Some of these coaches were sold by SNCF later in the 1990s and remain in service today… in Cuba!

On 21 September German Transport minister Andreas Scheuer presented proposals to transport ministers  from all European Union states proposing the creation of a new ‘Trans Europe Express’ (TEE) network based upon both daytime high-speed trains and a revitalised night train network linking multiple countries. The event, originally planned to coincide with the bi-annual InnoTrans trade fair in Berlin, also discussed pan-European freight development. Germany holds the rotating presidency of the EU for the second half of 2020. Mr Scheuer suggested the ‘Deutschland Takt’ regular interval timetable being planned for German domestic services by 2030 (p78) is a model for the wider European ‘TEE 2.0’ network development.