THE FIRST electric train has operated on the Shotts line in the Scottish central belt following completion of electrification by Network Rail and contractor SPL. On Sunday 24 February a Class 86 locomotive completed a number of test runs, including at linespeed, along the newly electrified section between Holytown and Midcalder Junctions. NR says the project has involved the erection of 223km of wires, installation of 2,500 tonnes of steel masts and modifications to 17 bridges.

The £160 million project, funded by the Scottish Government and delivered ahead of schedule, will enable ScotRail to introduce new Hitachi-built Class 385 EMUs on the route later this year. Work continues on station platforms and to create step-free access at a number of stations, which NR said was on track to complete by the end of March. The Shotts line becomes the fourth route between Edinburgh and Glasgow to be electrified, in addition to those via Carstairs, Falkirk and Airdrie/Bathgate. 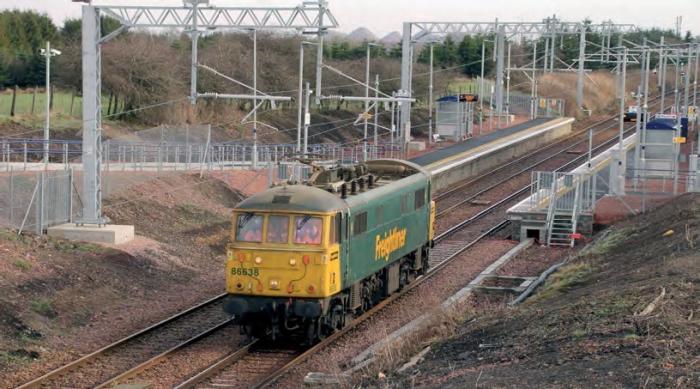 Powered up: Class 86 No 86638 testing the wires on the newly-electrified lines at Breich on the Shotts route on 24 February 2019.
Ian Lothian