There is an interesting variation on Dr Johnson’s aphorism that patriotism is the last refuge of a scoundrel, which recurs repeatedly in the Department for Transport’s paper ‘Decarbonising transport – setting the challenge’, published in March. It is claimed by Government that Britain is, or aims to become, the world leader in this, that or the other.

I give three examples of such Hubristic Self Delusion (HSD) in the box. The ‘Informed Sources’ legal department is currently codifying a new Law along the lines that if you have to tell people you are a world leader, you probably aren’t.

Anyway, DfT is developing a Transport Decarbonisation Plan and 2020 ‘will be the year we set out the policies and plans needed to tackle transport emissions’. The paper marks the start of this process.

Its charts showing projections of future transport emissions are indexed, which makes them useless for serious analysis. Where actual emissions figures are quoted, the basis of the statistics is unclear, or is suspect. 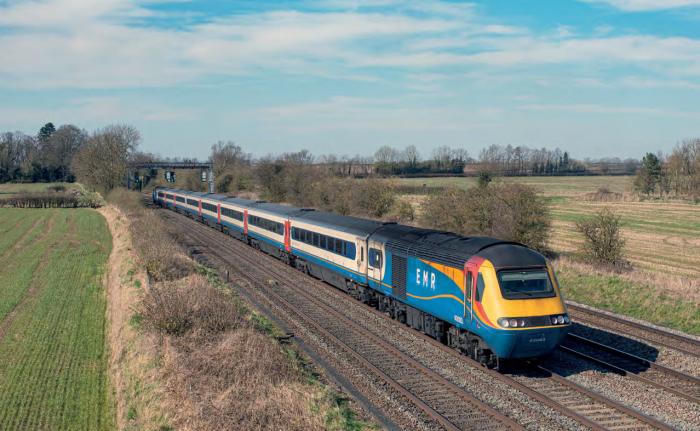 Obvious next route for electrification: the Midland main line. Power car No 43083 leads an EMR HST on a Nottingham to St Pancras service at Hathern in Leicestershire on 23 March 2020.
Mat Yardley

Take for example the bar chart showing ‘the greenhouse gas (GHG) emissions quoted for a passenger travelling from Edinburgh to London’. These are given at 144kg for plane and 29kg for train.

No mention is made of load factor for either mode and the train emissions are based ‘on an average for diesel and electric trains’. A footnote explains that ‘if a route is fully electrified, emissions would be lower than those presented’. Obviously, the news that the East Coast main line has been electrified for two decades has yet to reach New Minster House!

Out of interest I checked these figures with Professor Roger Kemp’s 2007 study for the Rail Safety & Standard’s Board (RSSB) on ‘Traction energy metrics’. Prof Kemp calculated the CO2 per passenger kilometre for a London to Edinburgh flight and also for a Class 91.

Using these data and a nominal 650km journey gave me 136kg for the airline passenger against 26kg for the IC225. But thanks to the rapid growth of electricity generation from renewables, the grams of CO2 per kWh for mains electricity is now much lower than it was in 2007, when Prof Kemp’s analysis assumed 455gCO2/kWh.

And the Class 91 doesn’t have regenerative braking, which would knock off another 15%. So you wonder where the data, which seriously understates rail’s advantage, came from.

Apropos Roger Kemp’s report, although I have a copy in my database, a reader asked where it was available. I thought I would give him the URL for the RSSB webpage but found it had vanished from RSSB’s online catalogue.

I did ask about this disappearance, but never got an answer. A reader’s experience suggested copies might be available on request.

If that is the case, there must be something in the report which is so sensitive that it is kept in the equivalent of those rooms where libraries in the 1950s kept books like Burroughs’ The Naked Lunch and sex manuals.

This has the makings of a Monty Python sketch.

Furtive looking researcher enters foyer of RSSB offices. ‘Excuse me’ he asks the receptionist, ‘but how can I download a copy of (whispers) “Traction energy metrics” by Roger Kemp?’ Receptionist looks shocked and presses red button on intercom. ‘It’s another of those electrification recidivists wanting you know what’.

‘We recognise that electrifying more of the railway is likely to be necessary to deliver decarbonisation. We have delivered over 1,000 single track miles of electrification since 2010. Most passenger journeys are made on electric trains. We continue to expand the electrified rail network, delivering projects on the Great Western main line and Midland main line that will lead to further environmental and passenger benefits’.

Likely? It will be blooming essential. But, Grayling alert, ‘take up of new technology will be important in decarbonising the railway and we are investing accordingly. We have recently funded, through Innovate UK and RSSB, competitions that provided over £4 million for projects to drive decarbonisation across passenger and freight. With our support the industry is developing hydrogen and battery solutions for use in rail that will play an important role in future decarbonisation’.

A valuable role, perhaps, but the leading role can only be played by electrification.

Network Rail is currently preparing a cross-industry Traction Decarbonisation Network Strategy (TDNS). You can argue whether Network Rail, for whom electrification is a pain in the overhead, is the right home for this report. I can remember a former Chief Executive arguing electrification was a bad thing because it introduced more assets to maintain and the potential for unreliability.

Anyway, according to DfT the TDNS will consider ‘where overhead electrification, battery or hydrogen trains might be most effectively deployed’. Note the conditional ‘might’ be usefully deployed. Based on the TDNS, DfT will develop a decarbonisation programme for the rail network which will inform the deployment of electrification and new technologies over the next 30 years.

DfT will also explore the scope to maximise efficiency from the railway, ‘through methods like increased use of regenerative braking or the use of solar power’. Ah, solar power. 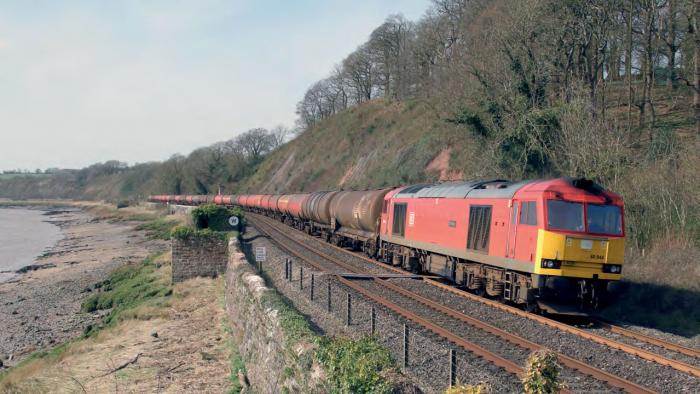 Not surprisingly the ‘Riding Sunbeams: First Light’ demonstrator project gets a box of its own, since it is funded through the DfT and Innovate UK ‘First of a Kind’ competition (p15, August 2019 issue). The project is described as ‘a world-first initiative to directly power trains using solar energy’.

This again typifies DfT’s fondness for ‘boffin-based’ solutions. A square metre of solar panel produces 150 to 200 Watts in good sunlight. An English Electric 507 traction motor has a rating of 185kW.

So to ‘directly power’ just one traction motor would require a thousand square metres of solar panels. As my colleague Ian Walmsley remarked when we were discussing Riding Sunbeams, it may be a world first initiative because only the Brits have got the decimal point in the wrong place.

When it comes to decarbonising the railway, we have to apply Occam’s Razor to the solution. This states ‘entities should not be multiplied without necessity’. Simple electrification will solve the bulk of the problem, yet DfT is obsessed with multiplying entities to avoid facing this truth.

Meanwhile, when it comes to the elephant in the room, or rather on the motorway, DfT is completely stumped by the challenge of decarbonising road haulage.

Emission standards regulations for heavy goods vehicles came into effect in July 2019. The new regulation sets binding CO2 emission reduction targets for HGV manufacturers of 15% by 2025 and 30% by 2030. Manufacturers face fines for non-compliance.

But that is reducing emissions, not decarbonisation. So what is DfT doing?

Well it is ‘taking forward a research project to identify and assess zero emission technologies suitable for HGV traffic on the UK road network’, developing with industry an ultra-low emission standard for trucks and sponsoring a £20 million Low Emission Freight and Logistics Trial which will support industry-led trials of a range of low-emission technologies for freight.

Oh yes, and conducting an operational trial of longer semi-trailers, which is authorising longer articulated goods vehicles to run on UK roads. This is mitigation not decarbonisation and environmentalists have been rebuffing attempts to run longer trailers for years.

On top of this, the Government is working to understand the potential for demonstrator projects to overcome some of the hurdles associated with the implementation of novel freight decarbonisation technologies with partners including the Connected Places Catapult.

In other words, more funding for the innovation industry. And as Elvis Presley nearly said, ‘a little less demonstration, a little more action please’. Mr Presley was, of course, a noted proponent of a rolling programme of electrification.

Of course, there must be something positive about rail somewhere in the paper. Predictably, it comes in the section on rail freight where Rail Freight Group Director Maggie Simpson takes no prisoners at the committee meetings which feed into papers like this.

Here we get two boffin-waffle-free hard truths. ‘The main way to achieve rail freight decarbonisation is to stop using diesel traction, through direct government intervention to roll out further electrification’. And ‘current alternatives to overhead electrification, such as hydrogen and battery, do not have sufficient power to pull heavy freight trains’.

■ The UK will be an internationally recognised leader in environmentally sustainable, low-carbon technology and innovation in transport.

■ The Future of Transport Grand Challenge ... aims to make the UK a world leader in the movement of people, goods and services.

■ In 2019, the UK was the third largest market for ultra low emission vehicles (ULEVs) in Europe and is a global leader in their development and manufacture.

‘Take up of new technology will be important in decarbonising the railway and we are investing accordingly. We have recently funded, through Innovate UK and RSSB, competitions that provided over £4 million for projects to drive decarbonisation across passenger and freight.’