OPERATOR OF LAST RESORT TAKING OVER FROM VTEC 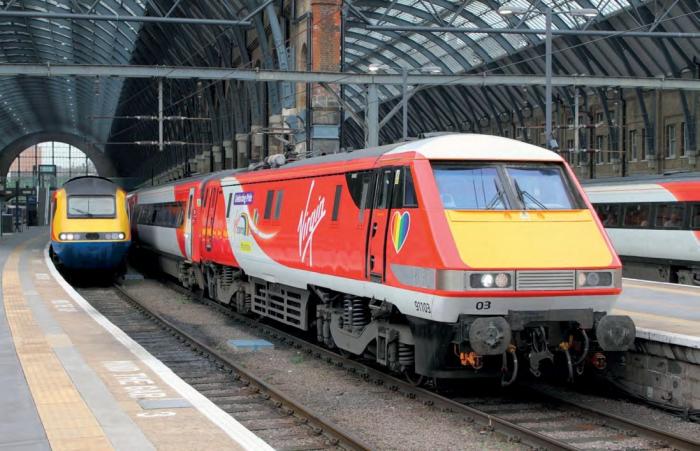 East Coast pride: VTEC loco No 91103 has been adorned with a special ‘Trainbow’ branding to mark the season of Pride events; it stands at King’s Cross on 23 May 2018 ready to work the 16.30 service to Edinburgh. VTEC’s sister franchise on the West Coast also marked the season by applying Pride branding to newly-repainted Pendolino No 390045, which was named Virgin Pride. Jamie Squibbs

THE VIRGIN Trains East Coast franchise was due to end on 24 June, with Transport Secretary Chris Grayling opting to call in the Department for Transport’s Operator of Last Resort (OLR) rather than agreeing a new contract with the Stagecoach/Virgin consortium.

Mr Grayling said in a statement on 16 May that calling in the OLR would help ‘make the smoothest possible transition to the creation of the new East Coast Partnership’.

The new operator will be called London North Eastern Railway (LNER), with this set to be ‘a new long-term brand’ for the East Coast main line operation. Mr Grayling has previously set out ambitions for the East Coast Partnership, intended to bring together track and train on the route, to begin in 2020.

The VTEC franchise, owned 90% by Stagecoach and 10% by Virgin, has faced difficulty in meeting its projected revenue targets and therefore its premium payments to DfT. Mr Grayling confirmed in February the franchise would only be able to continue for a ‘very small number of months’, with VTEC’s parent company support of £165 million set to be used up. In his statement to the House of Commons, the Transport Secretary reiterated ‘this is not because the route is failing’, and that ‘Stagecoach and Virgin Trains got their bid wrong and they are now paying a price’. He added that this supports the principles of the Brown review of franchising in 2013 that ‘in an effective railway industry, franchises can occasionally fail’.

Mr Grayling said DfT had been examining the case for either awarding a new contract to Stagecoach on a not-for-profit basis until the East Coast Partnership begins, or to call in the OLR. He said this analysis ‘suggested the case was very finely balanced’, adding ‘I have taken into account broader considerations and decided to use the current difficulties to drive our long-term plans for the East Coast Partnership’. DfT’s OLR function, previously held by Directly Operated Railways, is now contracted out to an Arup-led consortium which also includes SNC-Lavalin and Ernst & Young.

The assessment of the two options, published by DfT, suggested both a new contract to Stagecoach/ Virgin and a transfer to OLR would protect passenger interests, would support investment and improvement in the railway and would provide comparable value for money. The assessment indicated the OLR operation could lead to a ‘temporary lag in revenue growth’ but that OLR would be ‘better placed to support the development of the East Coast Partnership’. It also suggested the OLR option ‘provides some reinforcement of the strong message which Stagecoach’s losses have already sent to the rail franchise market’, making it clear DfT will not proceed with a Direct Award to an incumbent operator ‘if this is not the appropriate option overall’.

Mr Grayling also confirmed he had taken advice about the status of the franchise passports held by Virgin and Stagecoach, and confirmed both companies would continue as train operators, with ‘no suggestion of either malpractice or malicious intent’. However, he cautioned this decision is provisional and would be subject to further review at the point the VTEC contract was terminated.

GISBY TO LEAD LNER BOARD

The LNER team was set to ‘begin the task of working with Network Rail to bring together the teams operating the track and trains on the LNER network’, according to Mr Grayling. The chair of the organisation is to be former Network Rail Managing Director, Network Operations Robin Gisby, with the VTEC management team including Managing Director David Horne expected to transfer to LNER. Mr Grayling also said the new board will be instructed to bring forward proposals enabling employees to share directly in LNER’s success, with West Midlands Mayor and former John Lewis Chief Executive Andy Street to provide informal advice on this matter.

The Secretary of State also mooted the possible of bringing Great Northern services from King’s Cross into the LNER operation when the current Govia Thameslink Railway franchise ends in 2021 and said feasibility work on this would be carried out. DfT has previously indicated it plans to split the GTR franchise following delivery of the Thameslink Programme.

Mr Grayling said he had held ‘initial discussions with the Mayor of London’ about transferring some Great Northern services to London Overground, likely to be the suburban services into Moorgate, as recommended in Chris Gibb’s report on the GTR franchise.