MIDLANDS CONNECT has set out its ambition for improved transport links across the region in its latest strategy document.

For rail, it calls for fast, direct services between key centres that offer average speeds of 70mph, highlighting a number of existing slow connections. Connectivity to HS2, both in Birmingham and around the East Midlands hub, is also a key priority.

Early priorities set out include delivery of East West Rail, linking Oxford to Milton Keynes and Bedford and eventually to Cambridge, upgrades to services between Coventry and Nuneaton as part of the NUCKLE (Nuneaton-Coventry- Kenilworth-Leamington) scheme, completion of Midland main line electrification and the release of capacity on key arteries following the opening of HS2. Acceleration of smart ticketing development is also highlighted as a priority.

On the former, the aim is for a 20% cut in journey times to around 40 minutes, while for the latter options include classic compatible services via HS2 or use of an upgraded freight line via Castle Donington. Direct rail services between Coventry and Leicester and more capacity between Coventry and Leamington are also on the wishlist, along with improved capacity on the Derby-Stoke-Crewe corridor.

Delivery of the Midlands Rail Hub is seen as key to unlocking extra capacity in the Birmingham area, providing for an additional 10 train paths per hour. This would see new connections built at Camp Hill to enable some services that currently use New Street station to serve Moor Street, combined with a range of enhancements to surrounding routes.

Provision of sufficient rail freight capacity is also a priority, with actions highlighted including improvements at Water Orton junction (part of the Midlands Rail Hub scheme), restoration of four tracks through Leicester and providing modern signalling between Peterborough and Leicester.

Preparation for HS2 is a key theme of the strategy, and Midlands Connect is seeking to develop business cases for use of capacity released when the high-speed route opens and for classic compatible services. Ambitions include hourly services from Lincoln to London King’s Cross, a service using the Midland main line and then serving Nuneaton and Birmingham New Street and a service from St Pancras to the Toton Hub and thence to Manchester. It intends to initiate a study examining access to the Toton hub from the corridor between Derby and Nottingham along with connections to East Midlands Airport, covering both road and mass transit solutions.

The aspiration to deliver the Toton hub by 2030, three years earlier than currently planned, is also stated. 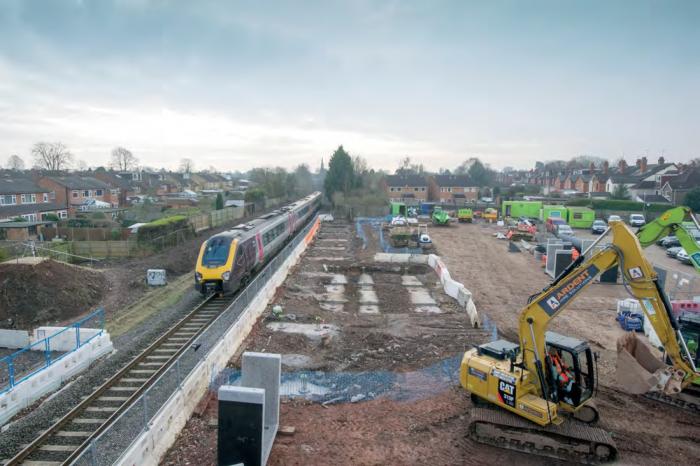 On the NUCKLE: a Class 220 Voyager forming a Manchester to Bournemouth service on 14 February 2017 passes the foundations that have been laid for the new station at Kenilworth, Warwickshire.
Fraser Pithie