GOVIA THAMESLINK Railway and Siemens have marked the completion of the construction of a new maintenance building at Hornsey depot.

The building forms part of an overall enlargement at the site and will be used to maintain the Class 700 and 717 Siemens-built trains for Thameslink and Great Northern suburban services respectively. Construction of the new building, along with new sidings and improved servicing facilities, was carried out by Volker Fitzpatrick on behalf of Siemens.

The original buildings at Hornsey are used to maintain six fleets for GTR, including the Class 387 EMUs the operator is introducing on its Great Northern route. Siemens will maintain the Class 700s (which will be based jointly at Hornsey and Three Bridges) and Class 717s in the new building.

The completion of the new maintenance building means the site is now one of the UK’s largest train servicing facilities at over 72,500 square metres. The Class 700s will start working on Great Northern routes in 2017, before beginning cross-London operations through the Thameslink core in May 2018, with the Class 717s introduced in 2018.

New facilities provided as part of the work include an underframe cleaning facility, two carriage wash machines, two bogie drops and full powered signalling to replace hand signalling. This follows upgrades including provision of a new control room and signal control depot on the original site. 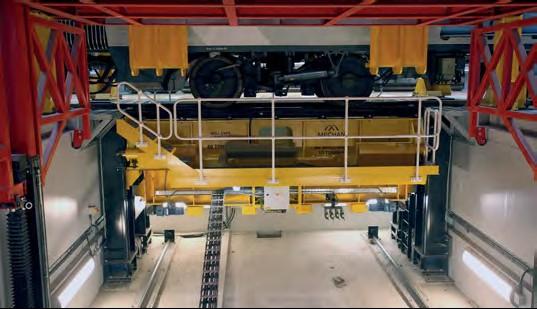 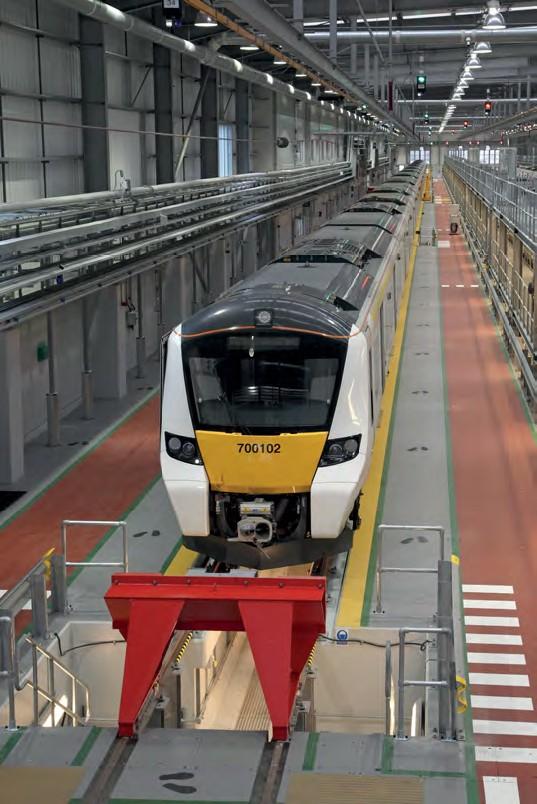 New maintenance facility: unit No 700102 in the recently-completed shed at Hornsey. Antony Guppy

CLASS 365s TO GO INTO STORE

GOVIA THAMESLINK Railway will continue to lease all 40 Class 365 EMUs for the remainder of its franchise, it is understood. The news follows confirmation that Great Western Railway will not be taking on any ‘365s’, with additional Class 387 EMUs ordered instead.

DfT has reportedly instructed Eversholt, which owns the units, that if new contracts are not forthcoming for any sets released by the introduction of Class 700 EMUs, the spare units must be placed in ‘warm store’ and protected for future use, with DfT covering the cost of this storage. Insiders report that a suitable location for their storage has yet to be identified. Tony Miles

DIRECT RAIL Services says it has a number of surplus locomotives and materials available for sale and is inviting offers. These include a Class 47 loco and six Class 37s. Expressions of interest were invited by mid-January. 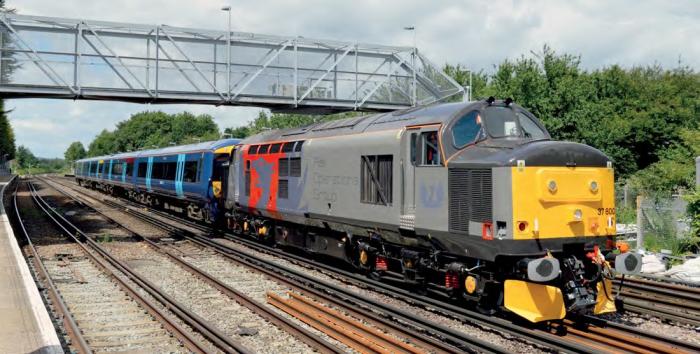 SOUTHEASTERN SAID in early January that the mid-life refresh programme for its 112 Class 375 EMUs had passed the halfway point, with 65 trains treated and back in service.

The project began in 2015, with work undertaken at Bombardier’s Derby factory. As well as application of a new external livery, the units are undergoing an internal repaint, being fitted with new carpets and lino, seats are being deep cleaned, new seat bases fitted and windows replaced where required. Work on each unit takes around three weeks.

A NEW design of wheel slide protection equipment has been trialled on a Greater Anglia Class 156 DMU. Plans are now being developed to roll out the installation to the remainder of Porterbrook’s fleets.

Owner Porterbrook has worked with SNC-Lavalin, Knorr-Bremse, Loram and GA to develop the system. Porterbrook was lead organisation, KB supplied and adapted the equipment, SNC-Lavalin led the system integration to the existing vehicles and Loram carried out installation of the first in class unit. Operator GA supported the dynamic testing.

The project team set the target of fitting one unit prior to the 2016 leaf fall season, allowing only four months from concept design to final testing.

The system used is KB’s latest wheel slide protection system (MGS3), which is a new product to the UK market and had not previously been fitted to tread braked vehicles. The trial unit performed well and was able to remain in service throughout the autumn period when other units had to be taken out of service for wheel re profiling.

GREATER ANGLIA is to create extra capacity at its Crown Point depot in Norwich, in addition to the new light maintenance facility it is to build at Manningtree as part of its new franchise, which will see a completely new fleet introduced.

GA’s franchise and programmes director Mike Kean told Modern Railways that the aim is to complete the Manningtree site during the second or third quarter of 2018. GA has already received bids from construction companies and as of late December was finalising the size of the site. It will incorporate a wheel lathe, which GA says will enable tyre-turning to be carried out on a proactive rather than reactive basis; the site will also be used for stabling and cleaning, and will include full controlled emission toilet (CET) emptying facilities.

Meanwhile, Crown Point depot is to undergo significant alterations, with a third full length road to be created at the side of the depot and a new washing plant to enable train washing and CET emptying to take place without trains having to enter the depot building itself, as is presently required. GA aims to keep two of the three roads available at any one time during construction work.

The first of the new trains ordered by GA is set to arrive during 2018, and is likely to be one of the 38 electro-diesels ordered from Stadler in three- and four-car variants for regional services. GA has also ordered 20x12-car EMUs from Stadler for London to Norwich and Stansted Express services; all Stadler units will be based at Crown Point, with the manufacturer to occupy the depot for maintenance and staff due to transfer from GA to the manufacturer under transfer of undertakings (protection of employment) (TUPE) regulations. The 10 Stansted Express units will be cycled through Crown Point for maintenance purposes, with the aim being that one unit is stabled in Norwich each night.

The main delivery of the Stadler fleets will continue through 2019, with some improvements, such as direct Lowestoft to London services, introduced in May 2019 ahead of a major timetable recast in December of that year.

GA has also ordered 111 Bombardier Aventra EMUs for suburban routes, in a mix of five- and 10-car formations. These will be based on the Class 345 EMU Bombardier is building for Crossrail, but the interior will be a suburban variant with 3+2 seating and toilets provided. Staff at Ilford depot will transfer to Bombardier under TUPE regulations as the manufacturer takes up maintenance of the new fleet.

The operator is also finalising with Network Rail a list of platforms that will need to be extended to accommodate the new trains, with particular attention being paid to some trickier locations. 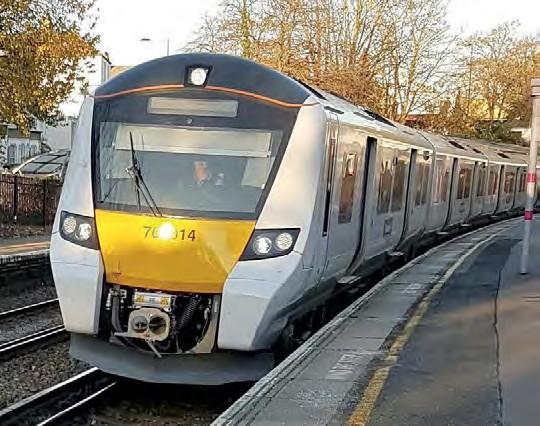 The first ‘700’ entered passenger service in June 2016 on the Bedford to Brighton route, with the first eight-car unit operating to Sutton in October. At the start of 2017, eight services per day on the Sevenoaks route via Bromley South and Catford were being operated using Class 700s, replacing the Class 319 EMUs previously used.

A total of 60x8-car and 55x12-car units are on order, with all due for delivery by 2018. In December 2018 an enhanced Thameslink timetable operating 24 trains per hour (tph) through the central London core is due to be launched. GTR plans to increase the frequency of services on the Catford route from two to four trains per hour in 2018 as part of this recast.

No extra ‘377s’ for Southeastern

THE GOVERNMENT has turned down Southeastern’s request to lease more trains to provide extra capacity on the franchise, citing depot-related costs as the reason. When Great Western ordered new Class 387s for electric suburban services out of Paddington, rather than relying on existing ‘387s’ cascaded out of GTR by new Class 700 trains, Southeastern was hopeful of acquiring Class 377s from Govia Thameslink Railway – as the latter operator is now flush with ‘387s’ (p10, June 2016 issue). The plan was to put 36x4-car Class 377s on the Tunbridge Wells stoppers and the Maidstone East line, freeing up Class 465s for train lengthening on the Metro routes in south London.

The Department for Transport has – for now, at least – put the kibosh on this plan. Rail Minister Paul Maynard said in a Parliamentary reply: ‘The Department’s investment board considered Southeastern’s proposal in December 2016. We have concluded the plans are not deliverable as previously proposed, principally because depot-related costs have escalated significantly. As a result, the Department has asked Southeastern and GTR (both owned by Govia) to work together to provide alternative workable solutions for offering additional extra capacity in Southeastern for 2017, including credible stabling options.’

SOUTH WEST Trains has launched free Wi-Fi on its 36-strong Class 458/5 EMU fleet. Provided by Icomera, the system also provides a communications link for driver advisory systems (DAS) on the units. Icomera also provides Wi-Fi on SWT’s Class 158/159 DMU fleet, with Nomad Digital the provider for SWT’s Class 444/450 Desiro EMUs. The new Class 707 EMUs will also offer Wi-Fi, meaning that the only SWT units not to do so will be the Class 455/456 EMUs used on suburban services.