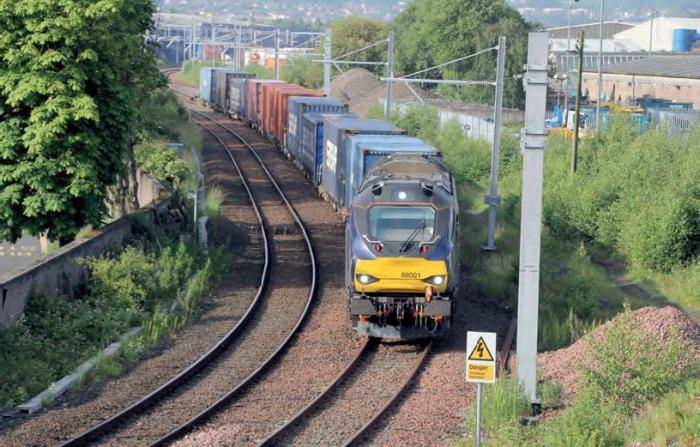 Last-mile loco: Direct Rail Services’ No 88001 running slowly along the single-track Fouldubs Junction – Grangemouth Docks line early on 29 June with 4Z40, the 22.29FO Daventry – Grangemouth Docks intermodal (the train had run earlier on 28 June from Tilbury to Daventry behind No 66428). The overhead wiring finishes here and the final part of the run into the docks was on diesel power. On the left is the oil terminal branch, which has not been electrified.
Ian Lothian

FORTH PORTS has launched a new weekend service linking the ports of Tilbury and Grangemouth by rail for the first time. The service, operated in partnership with Eddie Stobart and Direct Rail Services, began on 28 June, with the first train leaving Tilbury on a Friday via Daventry and travelling overnight to arrive in Grangemouth on a Saturday. This was the first time the Grangemouth Docks line had seen a loaded train since the demise of the former W. H. Malcolm Grangemouth – Elderslie service.

In the northbound direction cargo will include retail goods, food and drink, while the return from Grangemouth will move spirits, chemicals and fresh food, including potatoes. The train from Daventry had 20 containers but the run-round loop in the docks can only handle 10, so the train was split at Fouldubs Junction and the two halves unloaded in relays.

Meanwhile, PD Ports has launched a dedicated service between Teesport and Doncaster in partnership with GB Railfreight. The service is operated for multimodal transport provider Containerships and has been made permanent following a four-week trial period in the spring. The two daily trips convey 56 boxes for end customer IKEA Transport & Logistics Services, with the outward journey from Doncaster running via Darlington and the return from Teesport via Yarm.