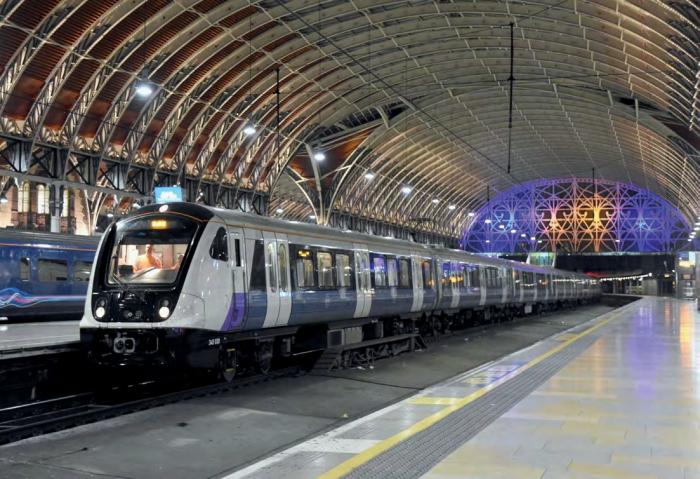 Aventra on test: unit No 345020 undertook trials on the Great Western main line on the night of 23 February 2018, working from Maidenhead Carriage Sidings to London Paddington. It is seen here at rest on platform 5 at Paddington.
Eiki Sekine

Ėmile Coué was the creator of a system of self-improvement based on auto-suggestion using the mantra ‘Every day in every way, I’m getting better and better’. Given that this is essentially the philosophy of depot engineers seeking to improve train reliability, perhaps we might rename this year’s Golden Spanners the Ėmile Coué awards (Or perhaps not – Ed).

Of course, the engineering version of the mantra is more prosaic. Something along the lines ‘Every period I’m going to improve my fleet’s MTIN, or at least not get worse’.

Period 12 2017-18 ran from 4 February to 3 March, which meant the final week caught the ‘Beast from the East’. So how did the new fleets cope with their contact with snow? And in our neck of the woods it was the ‘wrong kind’ of powder snow.

Well, current TIN-watch table toppers, the South Western Railway Siemens Class 707 fleet, saw the number of Technical Incidents (TIN) increase by two-thirds, bringing the Miles per TIN (MTIN) for the Period down to 4,770. The class still leads the MTIN Moving Annual Average (MAA) rankings, at least for one more month.

You can read about developments with the Thameslink Class 700 Desiro Cities in the previous item. GTR Engineering Director Gerry McFadden told me they went well in the snow. The only issue was with the horns, where the protecting plastic dome was too close to the mouth of the horn and snow built up – clogging the gap where the noise comes out. The simple solution was to move the dome further away, increasing the gap.

While the period MTIN fell very slightly, another two units joined the fleet and the number of TINs went up by only six.

Meanwhile, at North Pole and Stoke Gifford Hitachi is continuing to demonstrate the Japanese version of Couéism, otherwise known as Keizen or continuous improvement. Three fewer TINs and an increase in fleet miles to 263,000 saw the Period MTIN top 5,000 for the first time.

Finally, although the numbers are moving in the right direction, the Crossrail Bombardier Aventra Class 345 fleet has still only 13 sets in service. With these running a very low mileage, the performance figures are probably statistically insignificant at present.

Meanwhile, for CAF and Stadler the Table of Truth awaits. In the case of the Hitachi Class 385s for ScotRail, the windscreen signal distortion issue means the wait is currently indeterminate.