New wagons on the way 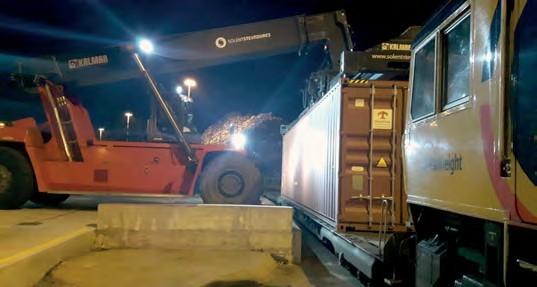 Loading up: containers are placed on the GBRf service in Southampton.

GB RAILFREIGHT has confirmed plans to lease 50 new biomass wagons from Nacco as part of a contract with Lynemouth Power Ltd.

The operator says the wagons have a payload of 70 tonnes, compared to 53 tonnes on the current lidded hoppers, allowing it to carry one-third more biomass on the service between Port of Tyne and Lynemouth Power Station.

They will run in two sets of 24 wagons, delivering 1,680 tonnes of biomass per train. The wagons are auto-loading and discharging, with an initial delivery due at the end of November followed by a further delivery in January.

Platooned lorries are set to be trialled in the UK in the coming months, with those trials looking at how platoons can operate on our crowded road network as well as the impact on other road users. There are further questions on the level of any cost savings that might be achieved, both in fuel and in driver costs, but it is probably reasonable to assume that, if they do operate, some efficiency will be delivered.

Yet even if these savings are significant, the road network would still struggle to accommodate the significant volumes moved by rail on major corridors. Research by the Campaign for Better Transport on behalf of the Department for Transport showed that on key corridors including the A14, A34 and parts of the M6, rail freight is moving the equivalent to 10-15% of current freight traffic, whilst facilities such as the strategic rail freight interchange at Daventry removed 64 million road miles last year. There is currently no evidence that platooning could provide sufficient additional road space to allow this to be accommodated without significant impacts.

Rail freight will need to respond to these technological developments, but work on Digital Railway, and on longer and more efficient trains, as well as private investment in terminals, will deliver efficiencies for our sector too, helping to close any gap. The passenger railway will similarly need to respond to the challenge of connected autonomous cars, which are equally likely to drive demand changes for rail, a point which the Commission fails to mention.

Most worryingly though is that the consultation document is already being used by opponents of some rail freight developments as evidence of a change of heart in Government towards our sector.

This acts to undermine the very private sector investment our industry needs, and which the Commission was set up to promote. It could also colour the views of potential customers and those who are looking to grow their rail logistics, who will wish to ensure a long-term future if they move their supply chains to rail.

Instead of this unhelpful rhetoric, the Commission in turn would do well to look properly at freight distribution by all modes, determining the key challenges and opportunities for all parts of the industry, and identifying a balanced approach which respects the needs of all.