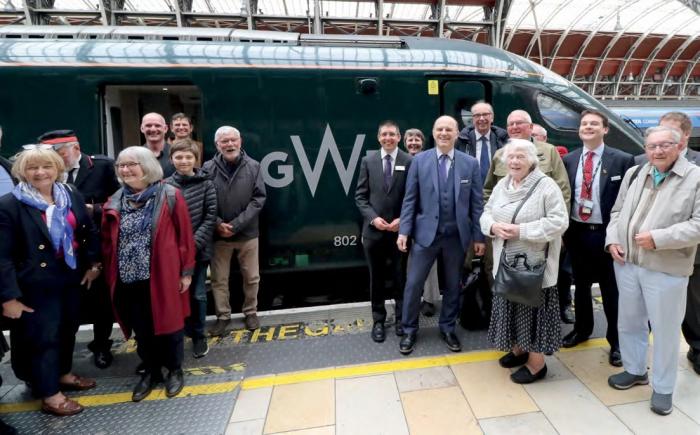 We did it: GWR Deputy MD Matthew Golton (in blue suit and tie) welcomes the record-breaking IET to Paddington on 12 June 2019. Keith Fender

GREAT WESTERN Railway ran a special train on 12 June 2019 to celebrate 175 years of the Paddington to Oxford route on the anniversary of the line originally opening. IET No 802005 made the journey between the two cities in 37 minutes and 35 seconds, according to GWR’s official timekeeper, with GWR Deputy MD Matthew Golton and invited guests on-board. A series of 175th anniversary events took place the following weekend at Didcot Railway Centre and other sites.

The original GWR opened the broad-gauge line between London and Oxford on 12 June 1844 to a terminus at Grandpont, just east of the current Hinksey Yard and south of the river Thames.

A special train had operated from London a few days before, carrying Brunel himself. Earlier attempts to build a line to Oxford had been resisted in Parliament, with the University concerned about the impact of easy connections with London. The Act permitting construction prohibited ticket sales to undergraduates, other than to ‘approved’ destinations! The terminus was short lived, replaced for passengers in 1852 by a new station on the site used today. Keith Fender