RAIL SHOULD WISE UP TO AIR QUALITY CONCERNS

Air quality is never far from the press at the moment, and certainly it is not far from politicians’ minds. London Mayor Sadiq Khan might be setting the pace with proposals to clean up the capital, but others are not far behind in their thinking. Central government is shortly to publish its action plan, in response to a legal challenge from Client Earth, and there seems little doubt the response will need to show real and tangible actions to improve the current situation.

It is clear from the statistics that the largest cause of air pollution is the road transport sector, which contributes around 80% of NOx emissions. Within that the largest source is diesel vehicles, particularly cars and vans. Despite recent scandals, there has been some progress in the road sector, with progressive Euro standards in engine design reducing emissions and improving fuel consumption. HGVs are now moving to Euro 6 standard (compared to IIIa in most railway applications), and newer buses are delivering hybrid and other technologies. The London Low Emission Zone has made a start on eliminating the most polluting vehicles, and further action is likely to follow soon. Yet there is still a very long way to go to make the step change in pollution levels that is required.

For rail, this ought to create an opportunity, because rail’s environmental performance is acknowledged as vastly superior to that of road transport. As the table shows, despite rail freight being largely diesel-hauled, it still produces almost 90% less PM10 and several times less NOx than the equivalent journey by road freight. Encouraging modal shift, both for passenger and freight, should therefore be an important part of Government’s action plan.

For rail freight, this includes looking at urban logistics and shorter distances for the retail sector as well as the more traditional trunk haul movements. The economics of such traffic is challenging, but public policy measures such as clean air zones would, if properly designed, help support rail’s case, by making road and rail costs more comparable. Rail may also have a role to play in serving consolidation centres from national or regional warehouses, and there are certainly niche sectors where freight on passenger trains can also help to remove road miles.

It is not all about retail either, with construction vehicles in city centres also contributing to air quality concerns. Here rail is proven to work, and the market is already looking to grow its presence so long as land for terminals and network capacity for growth is available.

The longer-term challenge for rail, however, is in maintaining its position in the face of continued progress from other modes in reducing emissions. Electric cars have some way to go for widespread acceptance, but uptake is increasing. HGVs are trickier, but there is persistent progress in engine technology and fuel consumption. Smaller electric vans are appearing, and alternative fuel technologies continue to be tested. As road tends to have a far shorter asset life than rail, the uptake of new low-emission technologies is far more rapid.

For rail, the only solution on the table presently remains overhead electrification. Recent experience on costs and delivery must however call into question the extent to which we can expect more of the network to be electrified in the future. Even on current electrified routes, freight is under pressure to divert, for example from the East Coast main line onto the non-wired Joint line.

Rail diesel technology is also lagging behind road, with rail still at Euro stage IIIa for the most part. This is not easy to fix either; even where technology might be developed by engine manufacturers, the small size of the UK market and the sub-optimal physical loading gauge make solutions expensive and difficult. There is therefore a real risk that as road ‘cleans up its act’, diesel rail will come into the spotlight as the remaining offender on air quality.

We cannot afford to let this happen, and need to start now to understand what the challenges and opportunities are, and how best we can respond to the challenges. Engaging Government to support the sector in doing this will be an important step over the coming months and years. 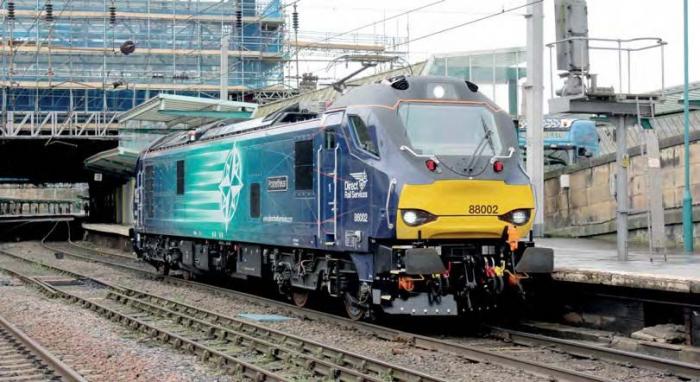 Electric freight: Direct Rail Services’ No 88002 at Carlisle while undertaking a test run from Crewe to Kingmoor on 30 March 2017. DRS is taking delivery of 10 of these locomotives, capable of operating on either 25kV overhead or diesel traction, from Stadler Rail in Spain.
Martin Turner