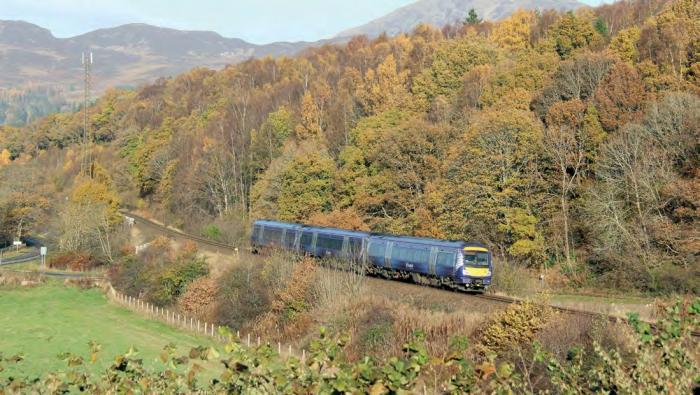 Set for an upgrade: the Scottish Government aims to improve the Highland main line so that a fastest time of 2hr 45min between Inverness and Glasgow/Edinburgh is feasible in 2025. This is No 170426 working the 09.33 Edinburgh Waverley to Inverness service just south of Pitlochry on 17 November 2013.
Ian Lothian

THE SCOTTISH Government is seeking to develop a ‘pipeline approach to the delivery of major capital schemes’ for Control Period 6 (2019-24), according to its Transport Minister Humza Yousaf.

Mr Yousaf told the Government’s Rural Economy and Connectivity Committee the approach was supported by 63% of respondents in its Future Infrastructure Strategy consultation. He added it would bring ‘significant improvement in project specification, development and governance’ and would ‘provide greater oversight and discipline around the cost and the delivery timescales of such projects’.

Elaborating on the arrangement, Mr Yousaf said there is presently a prescriptive list of projects for which cost estimates are liable to change over time, leading Network Rail to seek further funds. Under the new arrangement, enhancements projects would not be closed off based on what can or cannot be funded but ‘robust cost estimates and business cases’ would be developed. Subsequently, if the projects come back with ‘a level of detail that gives us confidence’, Mr Yousaf said they should progress to being funded ‘if it is right for us to do that’. He added there would be ‘no requirement for a project to be in the HLOS or in X, Y or Z document for it to be funded’ and that the change might result in projects ‘being agreed midway through a funding cycle or control period’.

When asked about how the approach might have changed projects already underway such as the Edinburgh Glasgow Improvement Programme (EGIP), Mr Yousaf said if more detailed work had been done on potential costs ‘we would have perhaps not been as surprised at some of the cost increases and delays’. However, he added that some of the elements that caused delays and cost overruns ‘could have been foreseen’.

Mr Yousaf told the committee that while timescales for the High Level Output Specification (HLOS) for CP6 have been affected by the UK general election, the Scottish Government is still looking to meet the Office of Rail and Road’s deadline of publication by no later than 20 July. Details of the pipeline approach will be set out in the Government’s future rail enhancement and capital investment strategy, to be published by the end of the year.

Elsewhere in the same discussion, Mr Yousaf stated he believes public performance measure (PPM) remains ‘the right overall industry measure’ because ‘it is important to have those five minutes for arriving at a destination’. He suggested a move to measure performance by right time arrivals would have ‘a serious impact on those who have mobility issues – there must be some flexibility in timing to ensure that those people can get on and off the train safely’. He noted, however, that there is ‘clearly a desire from the public for [PPM] to be supplemented or complemented’, for example by measuring it at intermediate stations as well as the end destination.

When questioned on the introduction of European Rail Traffic Management System, Transport Scotland’s director of rail Bill Reeve noted ‘its implementation track record has not been great to date’, adding that while the Government maintains ‘a close interest in the system’, he did not believe it would want to ‘rush into implementation just yet’.